Dismantling My Diorskin Nude Liquid Foundation. Or Not. 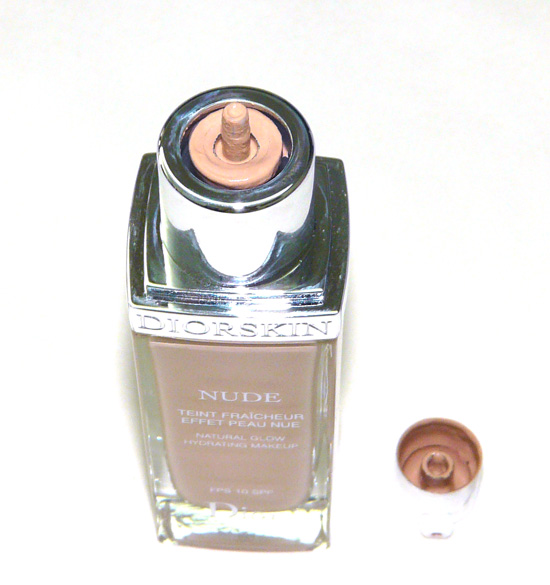 The very top lid taken off.

The pump on my Diorskin Nude Natural Glow Hydrating Makeup Liquid Foundation (that’s quite a mouthful) was not working and I got worried. It couldn’t be pushed down and I didn’t know if it could be saved, nor if there was still product left in the bottle. The bottle still looked full from the outside but that could probably just be the packaging. If so, the people at Dior are pretty clever because it looks brand new even though I’ve been using it almost daily for about 8 months (one pump a day).

I decided to take the pump out and see if I could repair it. I was all ready to destroy the bottle if need be but truth be told, after having plucked out the pump head, the little straw was stuck fast. I asked my dad for advice (he’s great at things like pumps) and here’s what he did:

After the pump head was removed, he turned the bottle upside down and began to push it down just like how you would do to a marker pen to get more ink on the tip. At first, it didn’t work (the pump wouldn’t budge) and only tiny drops of the foundation stained the paper (use a piece of tissue for hygiene’s sake). But after a while, somehow or other, the pump wasn’t choked anymore and began working as per normal. It helped to shake the bottle vigorously in between tries too, to loosen up the stuff inside. I suppose the pump had stopped working because a part of the foundation might have dried and as a result, clogged up the suction tube.

I hope this entry helps those of you who have problems with the foundation’s pump. I know some people have had trouble with it, especially when nearing the end. By the way, this is my holy grail liquid foundation and if you’d like to read my review on it, click here!