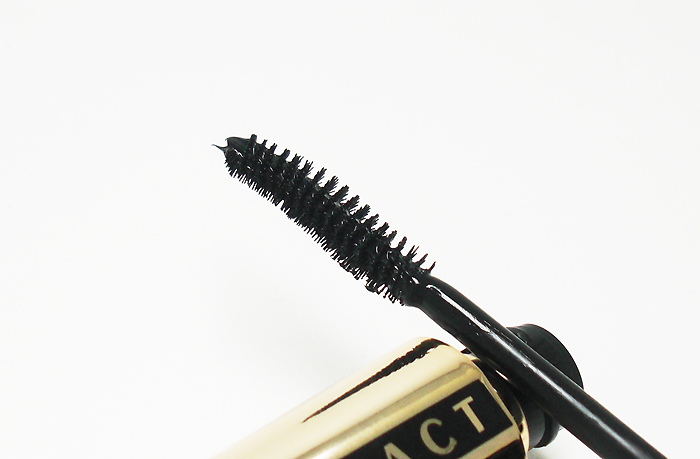 Close-up of the brush.

Another angle of the brush.

This mascara from L’Oreal is going for cheaper than usual at the local NTUC outlets in Singapore (December promotion). I decided to get this after having tried the Ultra Collagene Mascara from L’Oreal and liked it. This mascara is a fibre mascara which can be easily washed off with warm water. It’s not waterproof so if you’re looking for something heavy duty, this isn’t the right product.

I like the way the brush curves. It’s not a simple one-direction curve but more of an “S” shape so that it reaches my outer lashes. The mascara itself does not volumise as much as the Ultra Collagene but it does a good job at lengthening my lashes without resulting in clumps. It has a pretty strong chemical smell and that can put off some people, including me, so I hold my breath when I apply it. As for the curling effects, I’m not so sure because I use a lash curler beforehand but it does hold up my curled lashes well for a good number of hours. Overall, I’d say this is an OK mascara. For the price, which is rather high for a drugstore brand, I’d really prefer they take the smell out of the equation.

She was born this way with a twist via {link url="http://theyellowcoyote.deviantart.com/favourites/#/d2msz8o"}TheYellowCoyote{/link}.