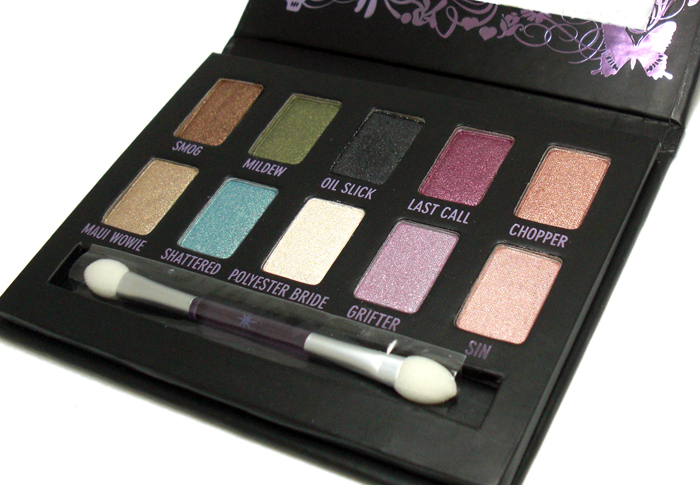 Velvet even on the bottom.

This lovely Eyeshadow Ammo Shadow Box from Urban Decay was my Valentine’s gift this year! I was very excited when I saw “maquillage” on the package (flown in from France) and had a fun time trying to guess what it was. I suppose I introduced the boyfriend to Urban Decay when I previously kept gushing about their 15th anniversary set of 24/7 Glide-On Eye Pencils. The guy’s got a good memory! Let me pause to go a bit crazy because I’m feeling so loved now. *SQUEAL*

10 lovely shades (packaging still intact, as seen on the applicator).

Close-up of the other end.

A show of all the shades in the palette.

The only shade that isn’t shimmery at all is Oil Slick, which has glitter in it but can be still used as an eyeliner or for shading. I noticed that the shades work very well in pairs. That is, the 5 top-bottom pairs, such as Smog with Maui Wowie and Last Call with Grifter. Polyester Bride is a great highlighter while Shattered looks like a dupe for Makeup Forever’s Iridescent Eyeshadow in 083 Turquoise Shimmer. The only negative thing about this palette is that the glitter falls off terribly easily, so you’ll have to be careful of that when applying the shades.

To illustrate the glitter fallout.

I’m so excited about playing around with this palette because it’s my first Urban Decay palette! I own some of their 24/7 Glide-On Eye Pencils (Stash is my all-time favourite) so I’m not a total stranger to the brand. The palette comes with a mirror and a double-ended sponge applicator, so you can bring it out with you for touch-ups if necessary. Otherwise, it makes for a good travel companion too! My favourite shade in the palette has got to be Last Call because I don’t have anything similar to it. I just love trying out new stuff!

And again, many many thanks and kisses to the world’s most perfect boyfriend. *hugs*