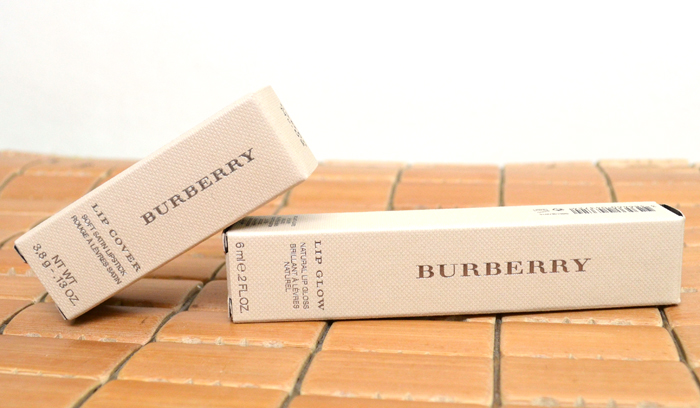 In my recent blog entry titled the Top 10 UK Beauty Brands to Check out During the London 2012 Olympics, one of the brands I featured was Burberry. Here’s a closer look at and swatches of a couple of the lip products I managed to get my hands on – the Burberry Lip Cover and Lip Glow.

The shades I got.

The Burberry Lip Cover in Cameo No. 02. Sophistication and elegance can be understated too.

The Lip Cover is in the shade Cameo No. 02. Applied, it’s creamy, pigmented and glides on smoothly. The shade is more of a nude than pink and is pretty much a wearable, everyday colour. In the picture above, the tip is obviously nicked and it was all my fault. I had taken interest in the magnetic clasp of the lipstick cover (there’s no other way it closes shut) and kept playing with it on the bus on my way home. One jerk was all it took for me to accidentally hammer the lid onto the lippie itself. No matter how much I kept my itchy fingers away from the lipstick from then on, the fact remains that I had destroyed some of that precious, classically British perfection. *sulk*

The Burberry Lip Glow in Ruby No. 16.

The sponge tip (a.k.a. doe foot) applicator of the gloss.

As for the Burberry Lip Glow, Ruby No. 16 is the perfect kind of red gloss a girl could ever need. According to the words of beauty blogger and friend Kristen from Beauty Sorority, it’s “bloody” and there’s really no other way I can describe it. It’s thick, it’s deep and it’s of a blue-toned kind of red that vampires fall in love with. I really like this shade and will surely do a makeup look with it!

And finally, just a swatch of the two shades side by side:

Tell me, do you own any Burberry lip products, or any Burberry products at all? Where did you get them from and how much are they doing for you?

Beauty Myths Series: SPF on Lips is a Must

Katy Perry and OPI Give Us Black...

The Hold Me Bag

Crabtree & Evelyn Blog Exclusive (And a...

Send Burberry Kisses to Your Loved Ones...