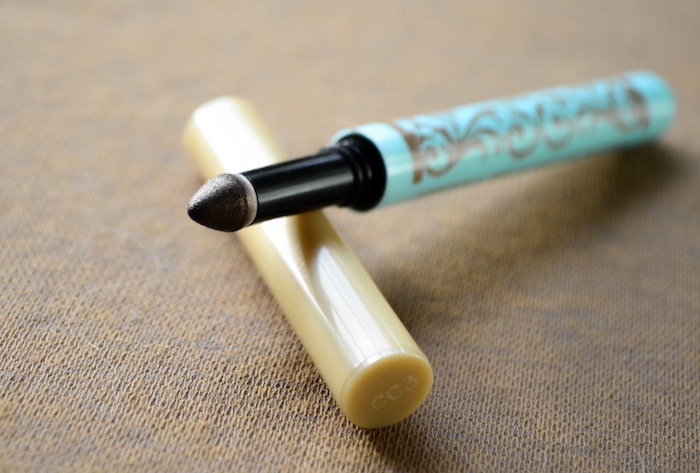 The Makemania Data Gradation Tip Shadow is all pretty, convenient, shimmery and versatile rolled into one. It’s a shadow pencil with a sponge applicator at the end, which springs into action when the cap is unscrewed. To apply, simply use it as you would a normal crayon eyeliner, and dip the pen into the cap to get more colour as and when needed. I recently took a plane to France and this was in my little makeup pouchette.

What’s in that cap?

A swatch of the Makemania Data Gradation Tip Shadow in Bronze Brown. That’s what my heart looks like when it’s sick.

I like this eyeshadow product because it’s really easy to use and the colour is the type of shimmery bronze that I wear a lot. The sponge tip doesn’t allow for very precise application, as it’s meant to be used more as a smudger. The eyeshadow is also meant to be used more as an eyeliner than shadow. It also doesn’t cost much – less than S$20. The only drawback is that it doesn’t last long enough, and it creases during the day, so you’ll have to reapply it every now and then. I’d suggest using a primer beforehand, but for a product that’s meant to be convenient, I’d say just save the hassle.

Did you know that you can now shop on Laced Ivory? Still looking for Christmas presents? We now have a store that sells mainly fashion and beauty items and new items are added every week! Find brands such as Alexander McQueen, Michael Kors, Chloe, Sephora, Forever 21, Topshop, NARS, Bobbi Brown Cosmetics etc, and many more! Items are hand-picked by me, so you’ll only find things that I personally like and would endorse. You can browse through the store using the link, “Shop,” in the navigation bar at the top of the blog. Items are categorised according to their types, and are sourced from all over the internet, including online stores and websites like Shopbop, Net-a-Porter and Nordstrom. To start off, here are just 5 items to go with today’s post!

Care for Your Bust at Tokyo Bust Express (Ad)