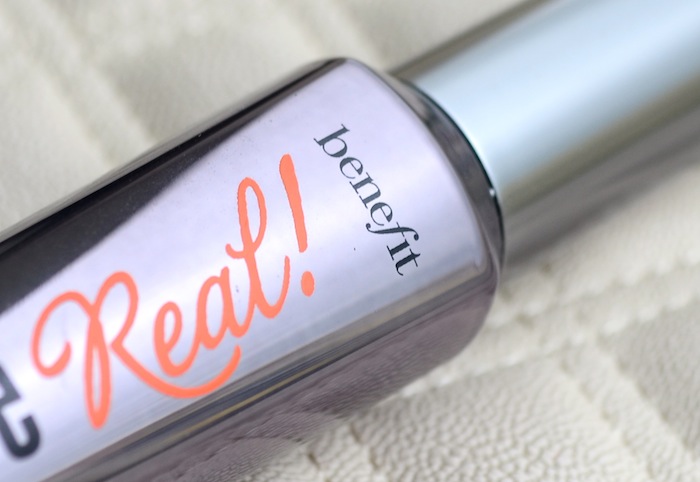 I had heard great things about the Benefit They’re Real! mascara about how many people who used this saw an increase in their lash length and volume. It seemed to really work because almost everywhere I went, people seemed to be gushing about it! I couldn’t resist the temptation and finally gave in. If you don’t fancy reading till the end of this entry, I’ll just go ahead and say that it didn’t come close to my current favourite mascara, the Fairy Drops Thin Film Platinum mascara.

The purple tube of promise.

First up, this mascara is a decent one. It is an inky mascara, instead of a fibre one, and so it doesn’t flake during the day. However, because of this, it isn’t able to volumise and lengthen lashes as much as fibre mascaras can. It doesn’t have a smell, doesn’t smudge and it didn’t give me an allergic reaction all the times I’ve used it. I do like the feel of the tube – it’s kind of like a flower vase. The brush itself is pretty interesting. Take a look:

Close-up of the mascara brush head.

There are so many bristles, all of which are solid and stiff, something like those on the Dior mascaras. The normal bristles around the sides are for lengthening while at the end, they splay out to allow the product to coat lashes better and volumise them further. Sadly, this mascara doesn’t hold curls very well, if at all (I apply it after curling my lashes). Would I get this again? Most probably not. This was such a disappointment, especially for the price, and it was my first Benefit haul at that!