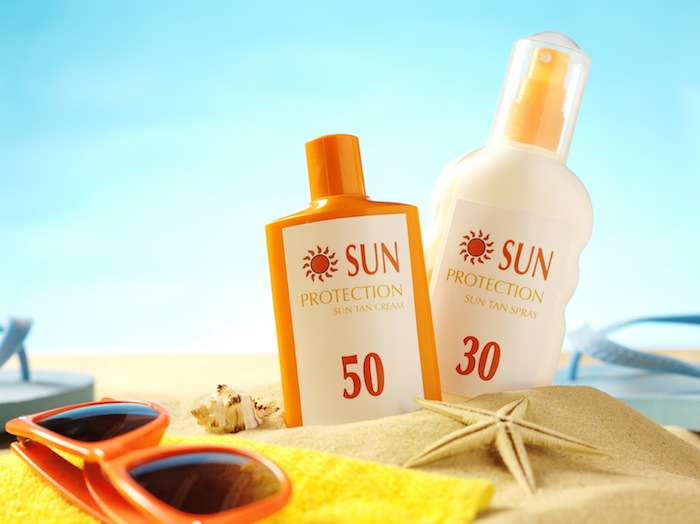 {Today we have two guests instead of the normal one. Introducing the Sun Sisters! They are very similar to each other in terms of what they do. And while they are pretty humble and quite endearing, they do detest the sun with such vengeance, Sunblock more than Sunscreen. Oh, and they also have a knack for speaking in sync. Let’s find out what they can do for us!}

Don’t go off on your beach holiday without first hearing from the Sun Sisters!

Hello! We’re the Sun Sisters and we’re very excited to be talking to you today. You know, many people think we’re kind of the same but we’re actually not!

Sunscreen: Sunblock is the elder one (Sunblock: “That’s me!”) and I’m the younger one. We don’t differ in age by a lot though.

Sunblock: Yeah but to be honest, I’m not even sure who is older because the very first types sun protection didn’t exactly fit in today’s definitions of sunscreen or sunblock. They were just called sunscreen, right darling?

Sunscreen: Absolutely! And if I remember right, one of the first ones was called Red Vet Pet and used in the war. How cool is that?

Sunblock: Super. Now let’s tell them about our differences.

Sunscreen: *giggles* Hokay! So. Basically, it’s pretty simple. The way sunscreens like me work is that we are kind of like a piece of protective veil over your skin. For example, you can put out a piece of cloth on a sunny day and look at its shadow. It’s not completely dark, is it? Most of the time, you can see a bit of light through. We block a portion of the sun’s rays – that damned thing, pretending to give us warmth and promote the survival of living organisms but also at the same time –

Sunscreen: Exactly! How hypocritical is it?! If it really wants to protect us, then take away all that UV! We don’t need those! Just give us the good stuff, is it really that hard to do?

Sunblock: Sigh, OK, I guess they don’t want our complaints. Let’s continue with the part about you blocking the sun’s rays.

Sunscreen: Oh yes, you’re quite right. So, where was I? *pauses* Ah! As I was saying, we – the sunscreens – block a portion of the sun’s rays by absorbing them, but we also let a bit of them through. And just how much we let through is shown on our SPF rating. The higher our SPF number, the more rays we block. And obviously the less rays we let through. Normally, an SPF of 15 is enough, so you really don’t need something with SPF 40! It’s so ridiculous, how some people scramble for the higher numbers. They don’t mean anything! Don’t they realise? It’s all a marketing gimmick! If you want something that heavy duty, you should all use sunblock instead!

Sunblock: That’s quite right too. *nods* How we sunblocks work is that we are particles that completely reflect all the sun’s rays so nothing gets to you. Nothing! Zilch! You’re 100% safe! It’s just… so many times people buy what they think is a sunblock and it has an SPF rating on it. An SPF number on a sunblock! What a joke! You don’t need SPF when there’s nothing to be, well, SPF-ed, if I may say! I must admit it can get quite confusing sometimes because nowadays, beauty companies like to mix the two of us up in one single product. So for example, you can have PABA and zinc oxide in a foundation. PABA is an ingredient found in sunscreen because it absorbs UVB rays, while zinc oxide is an ingredient in sunblocks because it reflects all rays. It all boils down to what kind of sun protection you’re out looking for, really, and whether your skin can take some of the other ingredients we have within us.

To end off, we’d just like to say that we both always think that protecting against all types of rays is good, but don’t forget that you also need some vitamin D! If anything, we wish Aladdin’s genie would grant us our wish of banishing those awful UVA rays, the ones that give people cancer and cause premature ageing! If you know where we can find such a lamp, tell us! Or maybe we could take…