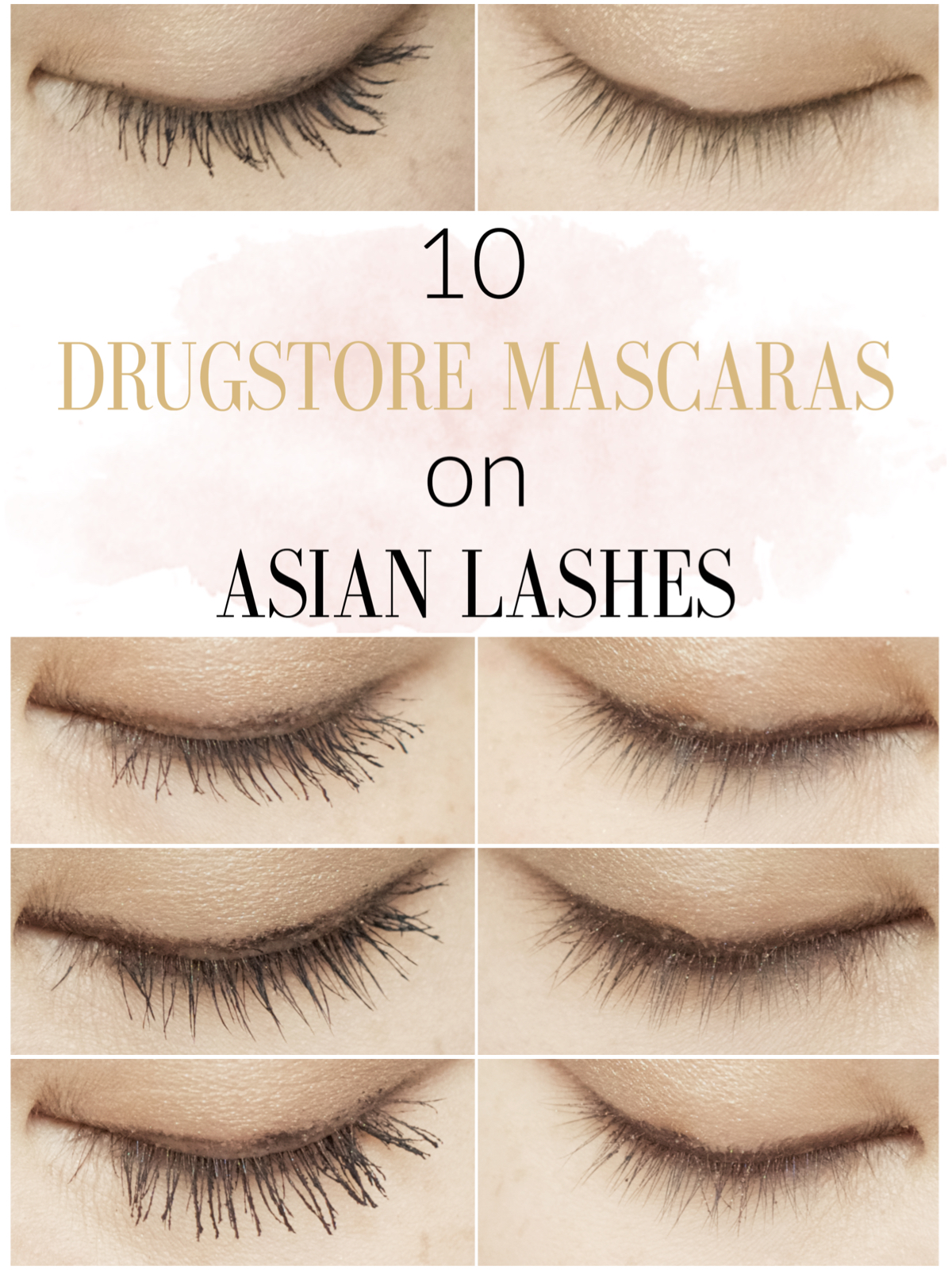 You cannot imagine just how much money I’ve spent on mascaras the past month! As a beauty blogger, and one that loves having long lashes to look more awake, I finally decided I had had enough of lousy mascaras. I don’t usually wear falsies because they are an additional step and can be quite heavy – I’ll talk about my love-hate relationship with them another time.

Mascaras for daily wear is good enough but when you find one that does close to nothing for your lashes, you’d wish you hadn’t even bought it at all. Since I use this daily for work, they run out pretty fast and so it doesn’t make sense to buy one from a luxury brand.

In this blog post, I’m going to review and compare 10 drugstore mascaras (shown below in alphabetical order) on my asian lashes. The pictures on your left are the ones that have been curled with a lash curler and with mascara on, while the pictures on your right are of my other eye without curling nor mascara. I’ve picked these mascaras from reading tons of reviews online and from what I feel you would have a higher chance of picking out when you are in the drugstore. There isn’t one out of these that I feel is the ultimate best – just the one that would suit your needs the most. 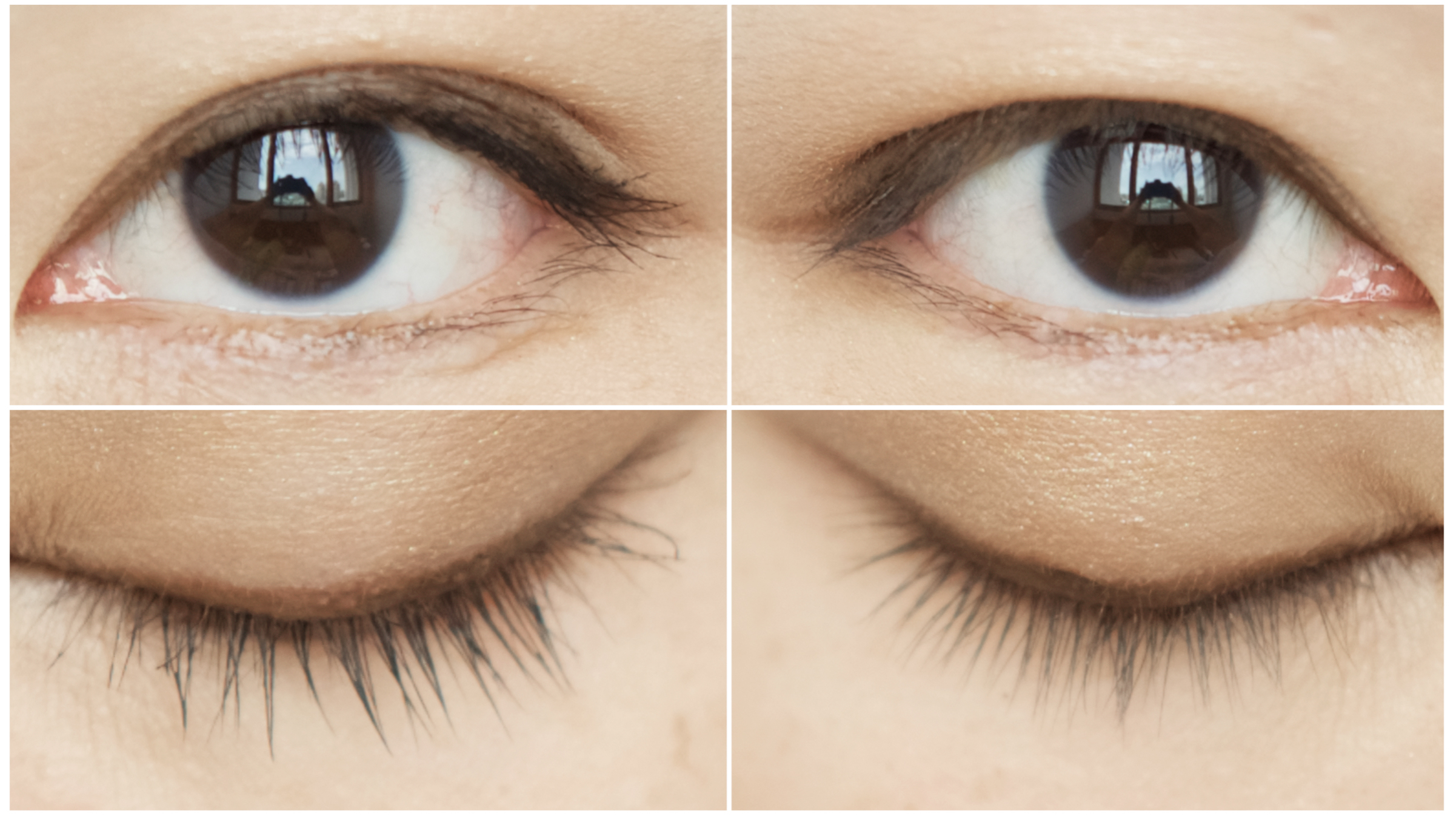 This mascara was such a disappointment. It does almost nothing for my lashes, even though the hot pink on the packaging really drew me to purchase it at the store. It doesn’t hold curls at all and barely defines my lashes. I really wished Australis made a better mascara, especially since I love their AC on Tour Contouring and Highlighting Kit.

This was yet another sad case. I had such high hopes for this one, as so many people are raving about it online and it seems to be one of the more popular Bourjois mascaras. I’ve tried a couple of Bourjois mascaras before and they were better than this, which explains why I had no idea it would turn out like this. Again, like the one above, it doesn’t hold curls, though it does define the lashes a little more. I did notice the brush being more flexible than other mascaras. I got excited initially about the side magnifying mirror on the tube but that was about it. 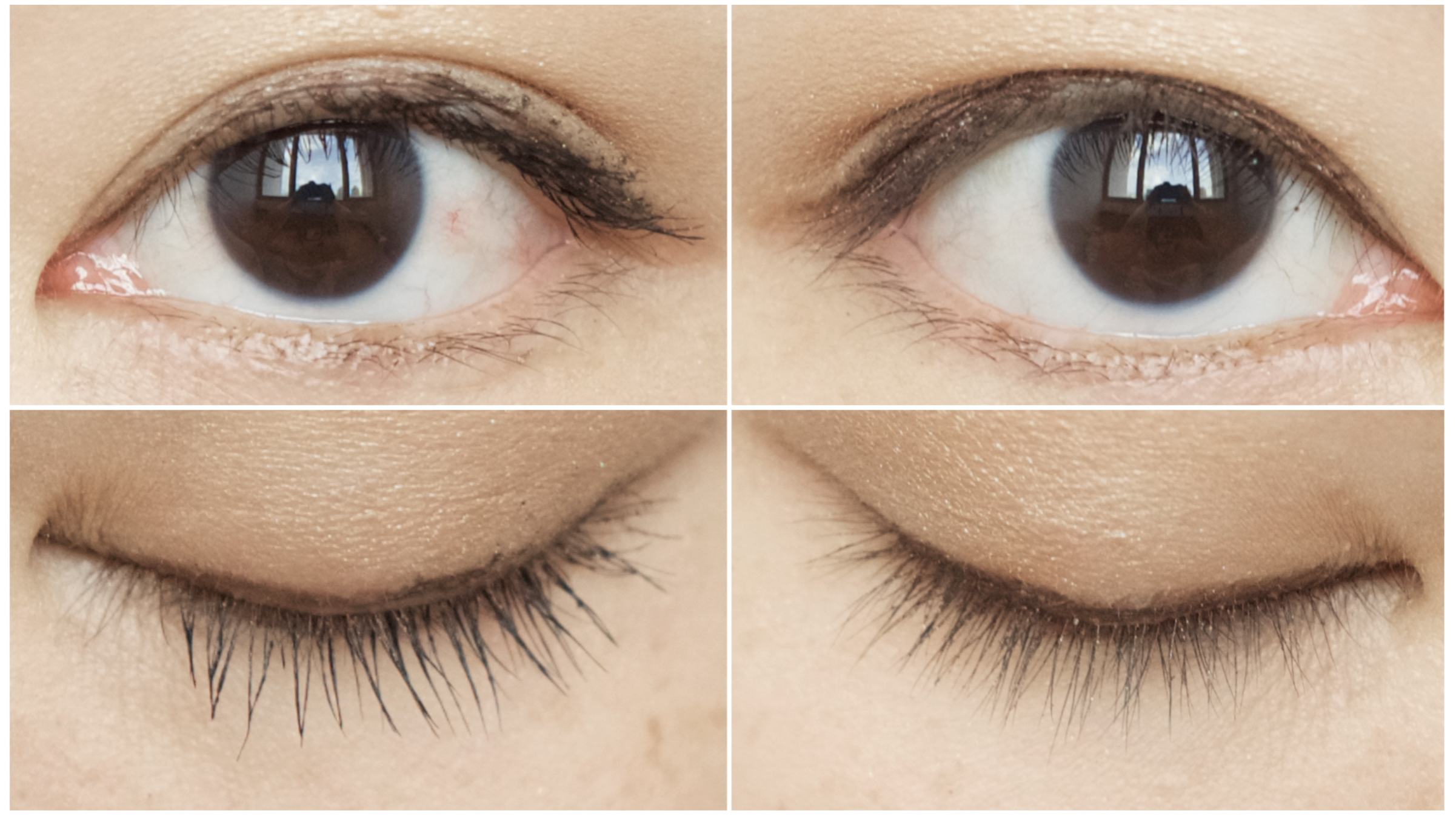 This mascara does define the lashes slightly but like the other two above, it doesn’t hold curls that well. If you’re looking for something that only defines or darkens your lashes, and if you’re a fan of Korean makeup, this could be it. 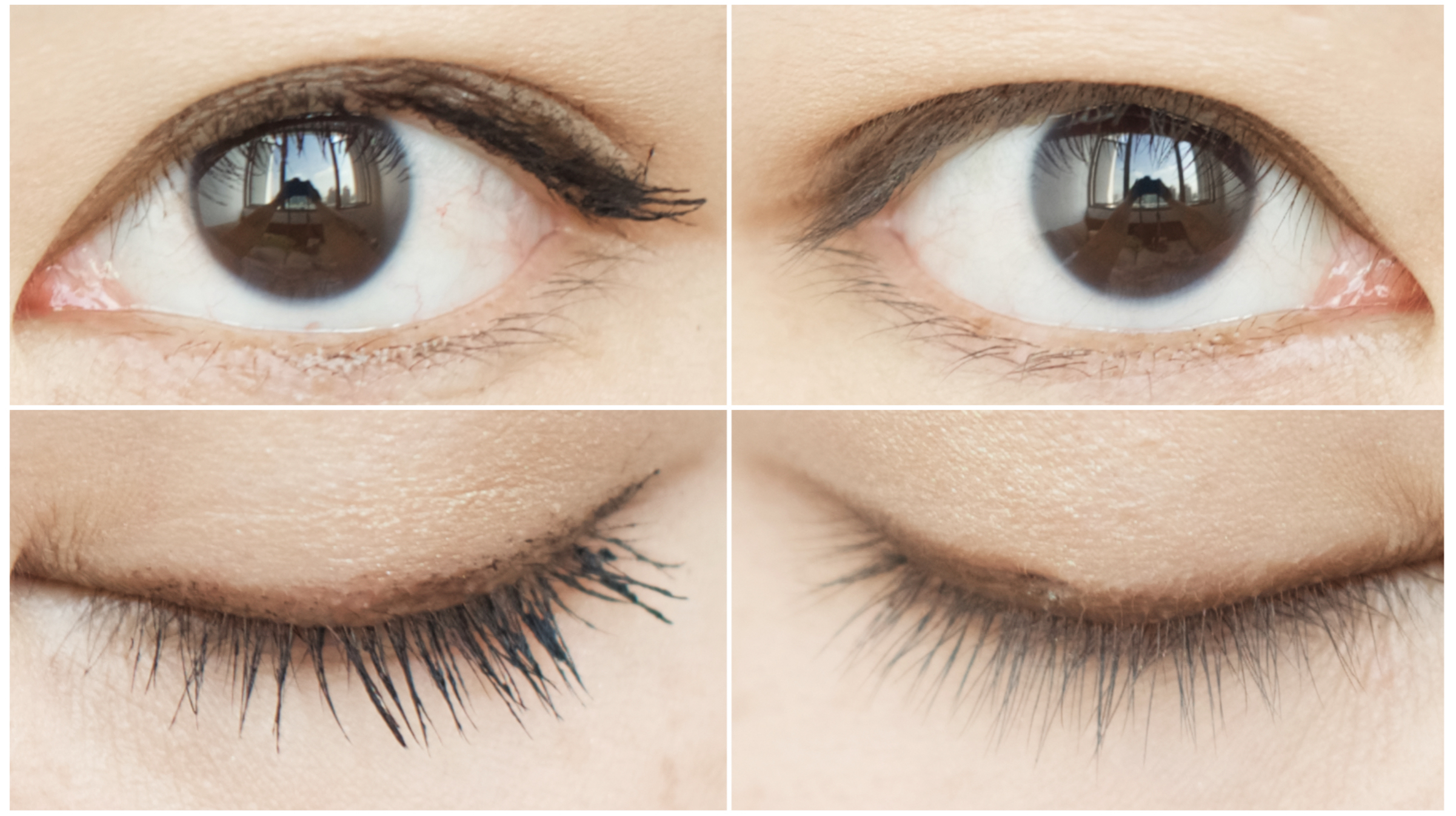 When I bought this mascara, the brush was separated from the tube, and the tube had its own screw cap tightly shut. This means that if you buy this online and it comes with the brush in the tube – and without packaging – you’ll know it’s at least been opened.

The mascara is OK, nothing to rave about. Out of the four you’ve seen so far, this is probably my best option even though there is minimal clumping. It does define my lashes and maybe has a little curl to it but it comes nowhere close to the 20X volume it claims to deliver. Moving on! 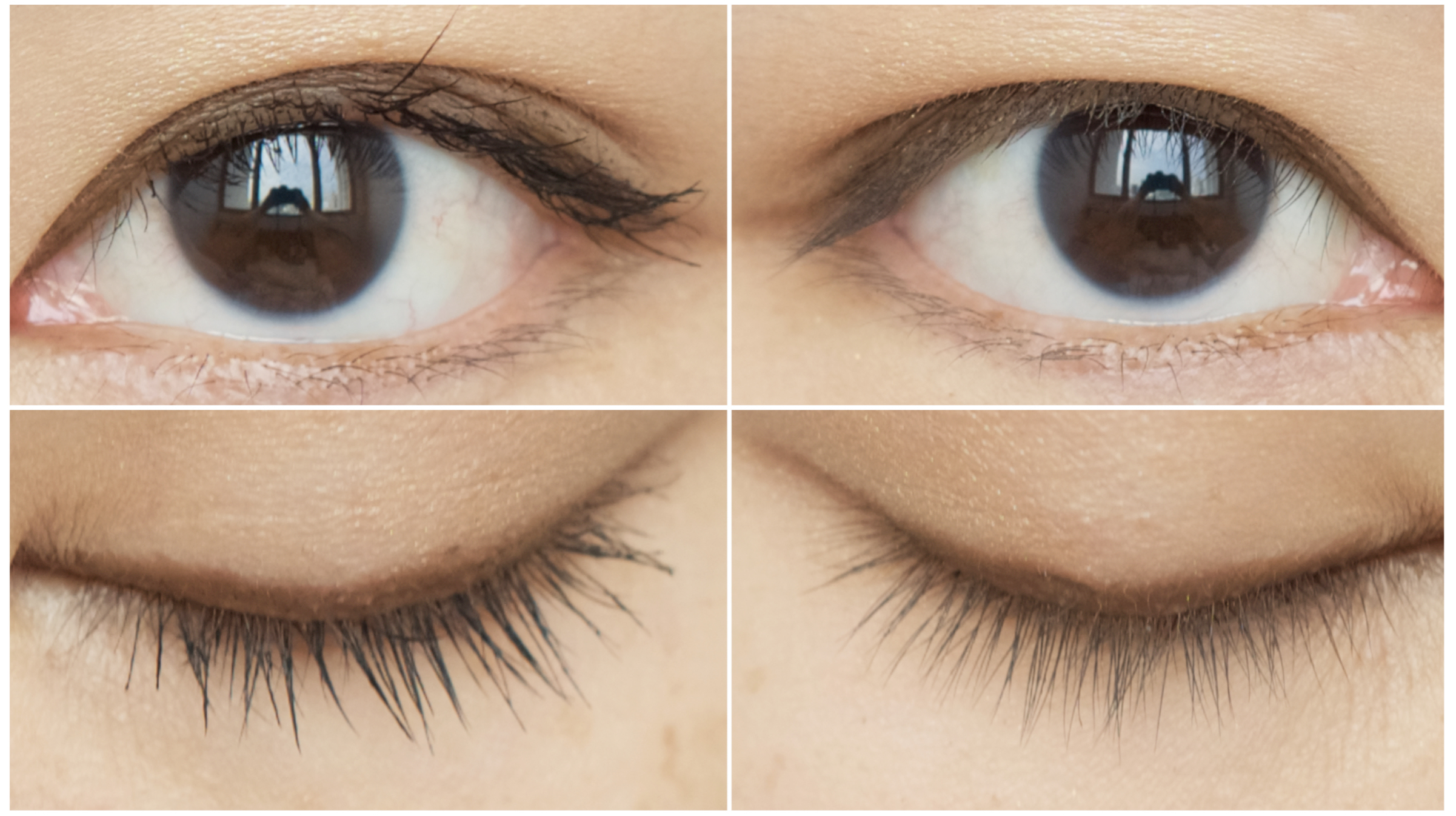 I decided to give this a try because I have faith in Heroine Make. After all, my Holy Grail mascara is their Long and Curl Super Waterproof one. But this one only defines the lashes and has a meek attempt at holding my curls. At this point, I’m just about to lose faith in mascaras all together. 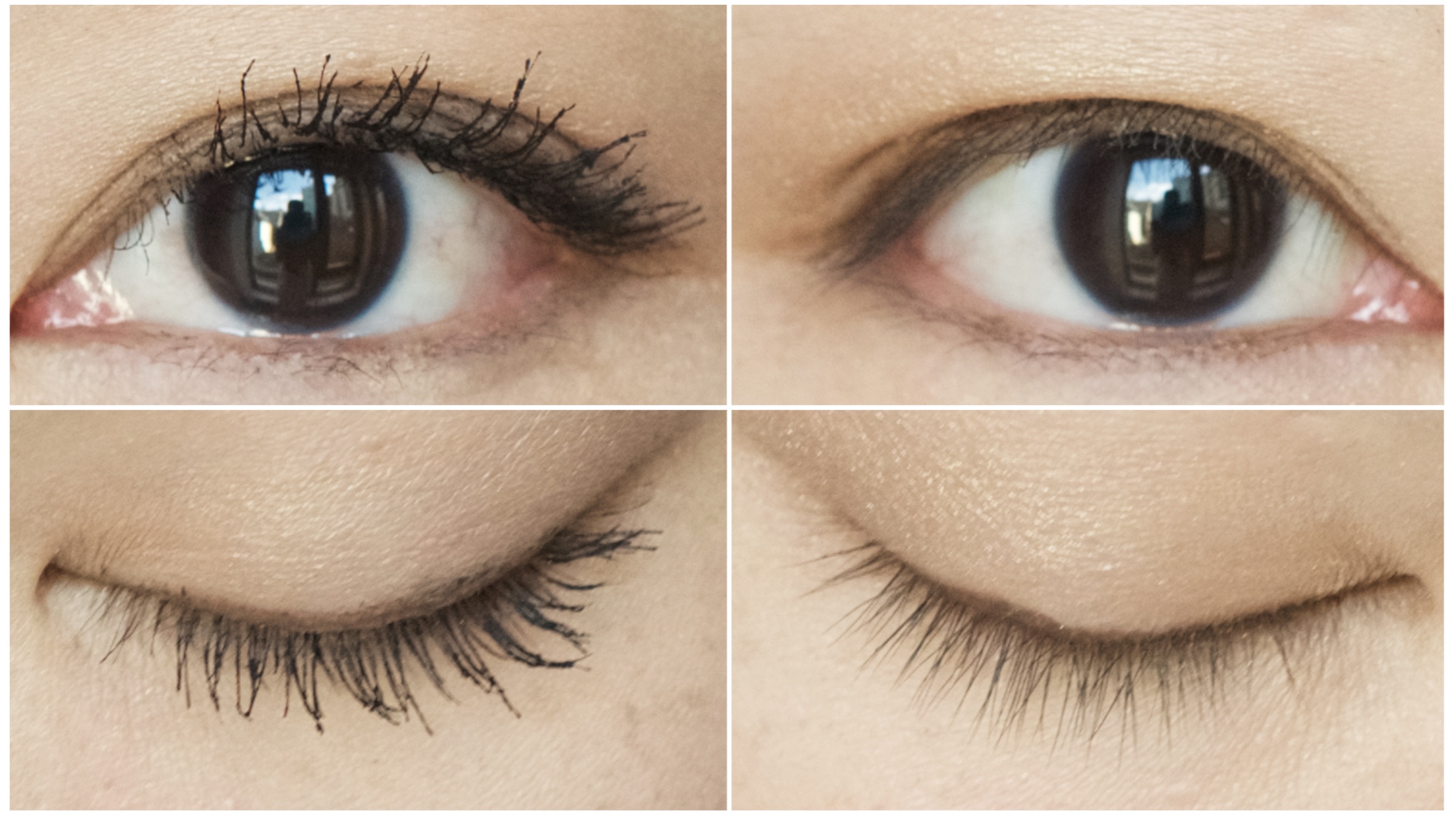 Yes, yes and more yes! This is my Holy Grail and you can see why. It defines and volumises my lashes, and holds curls very well. There might be slight clumping and it can dry up faster than non-fibre mascaras but it’s a small price I’ll pay for a mascara that does its job well. Besides, adding some eye drop in the tube always helps prolong the life of mascaras that are drying up

I will always recommend this mascara to anyone who is looking for one and guess what? You can purchase it directly from Shopee or on Walmart! 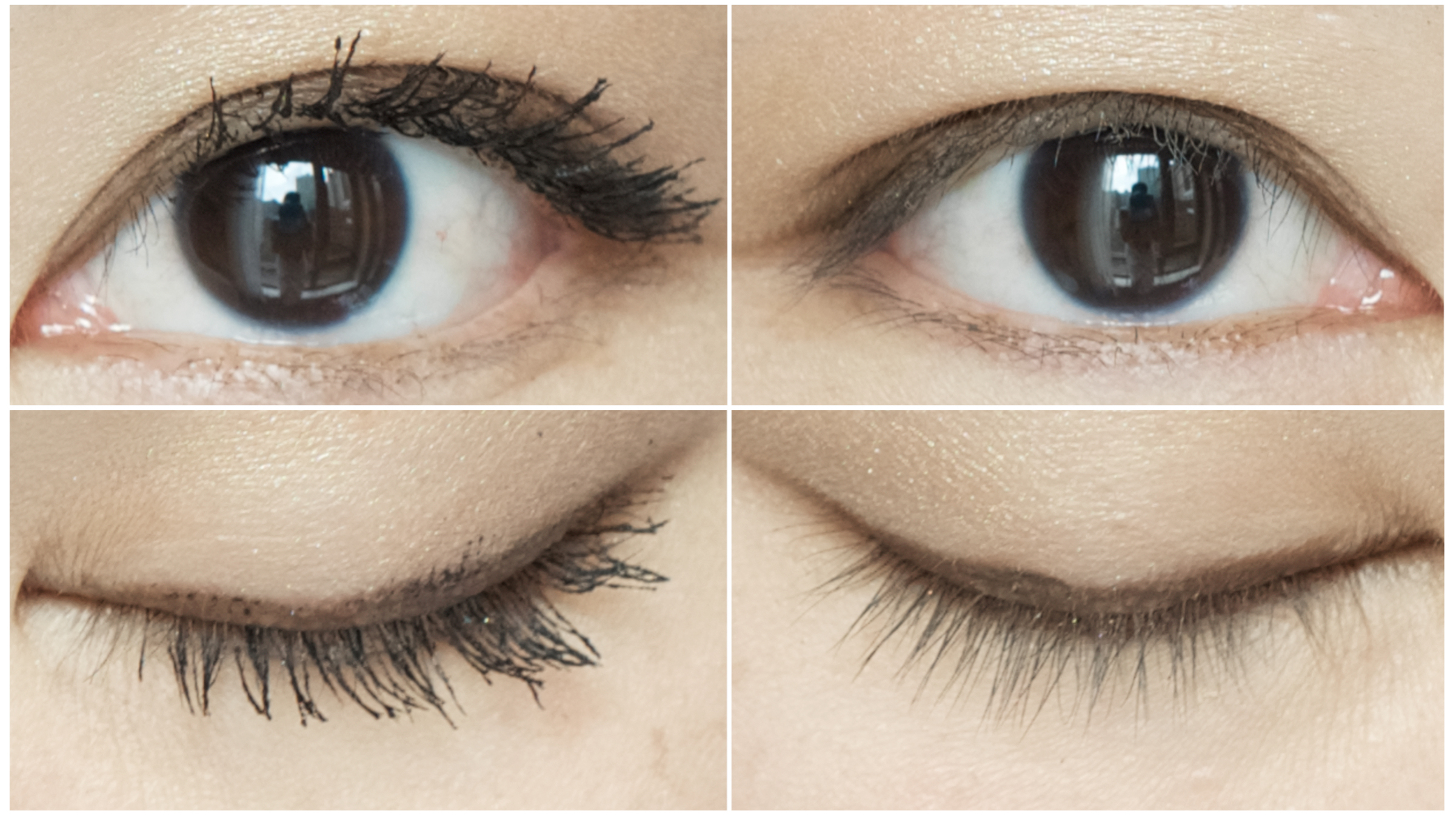 This mascara turned out to be better than expected. It volumises more than lengthens, and holds curls pretty well. The bristles of the brush may be short but they are sturdy like the ones from the L’Oreal Fasl Lash Butterfly Waterproof Mascara. A decent buy, I believe. 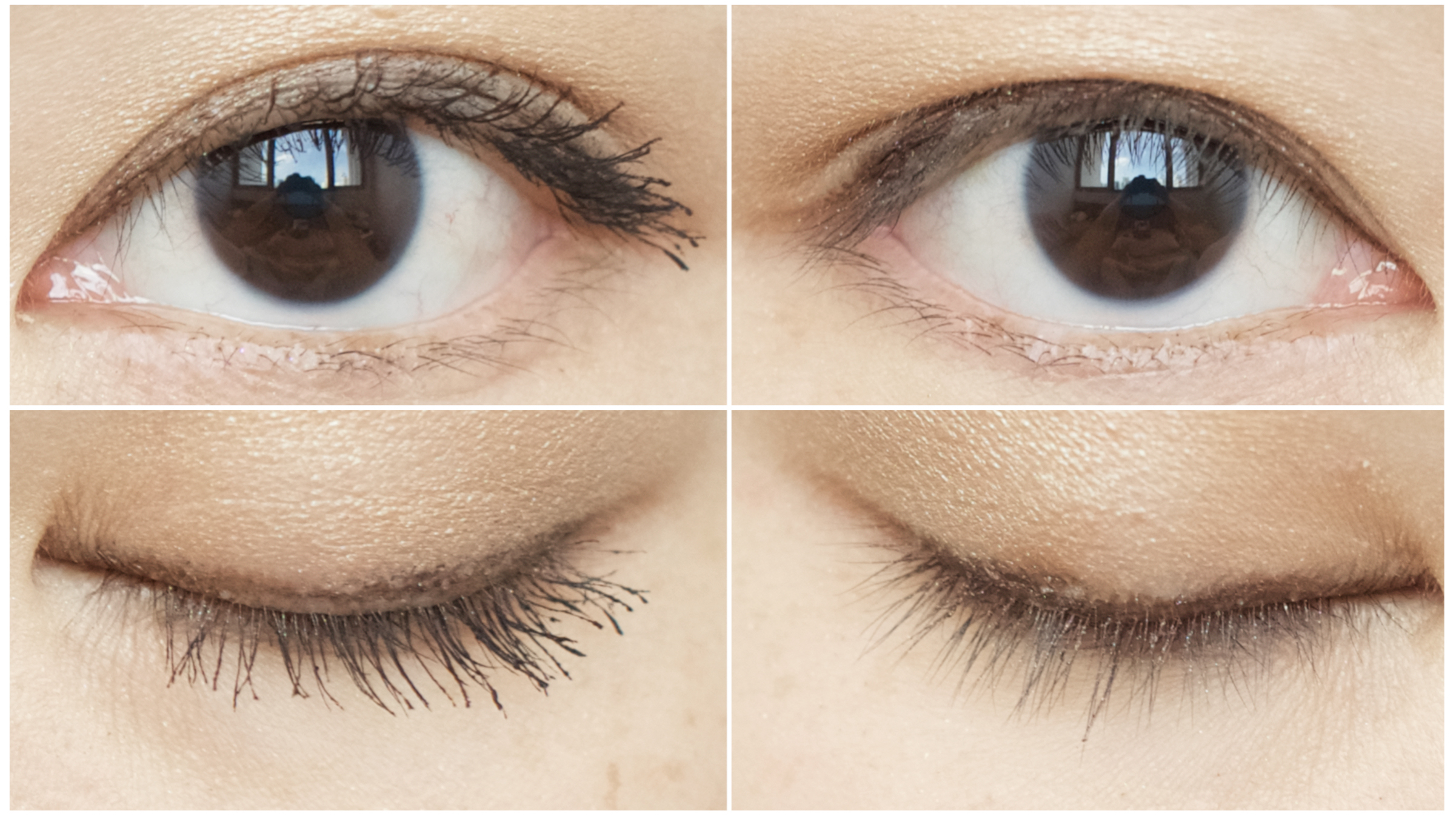 This mascara is more lengthening than volumising and does a decent job of holding curls. I love the way the brush is asymmetrically designed (L’Oreal calls it the “Double Winged Butterfly Brush”), such that the super sturdy bristles can easily reach between your lashes. Because the bristles are so tough, it makes this brush almost like a lash comb while you apply mascara – perfect to prevent clumping. The end of the brush is also thinner at the end, which makes it easy to reach my outer lashes.

The mascara somehow deposits more product at the base of the lashes than at the ends, giving a very natural, fanned-out look. I wear this on days now when I just need something that opens up my eyes but doesn’t make them as dramatic as the Heroine Make Long and Curl Super Waterproof one does. 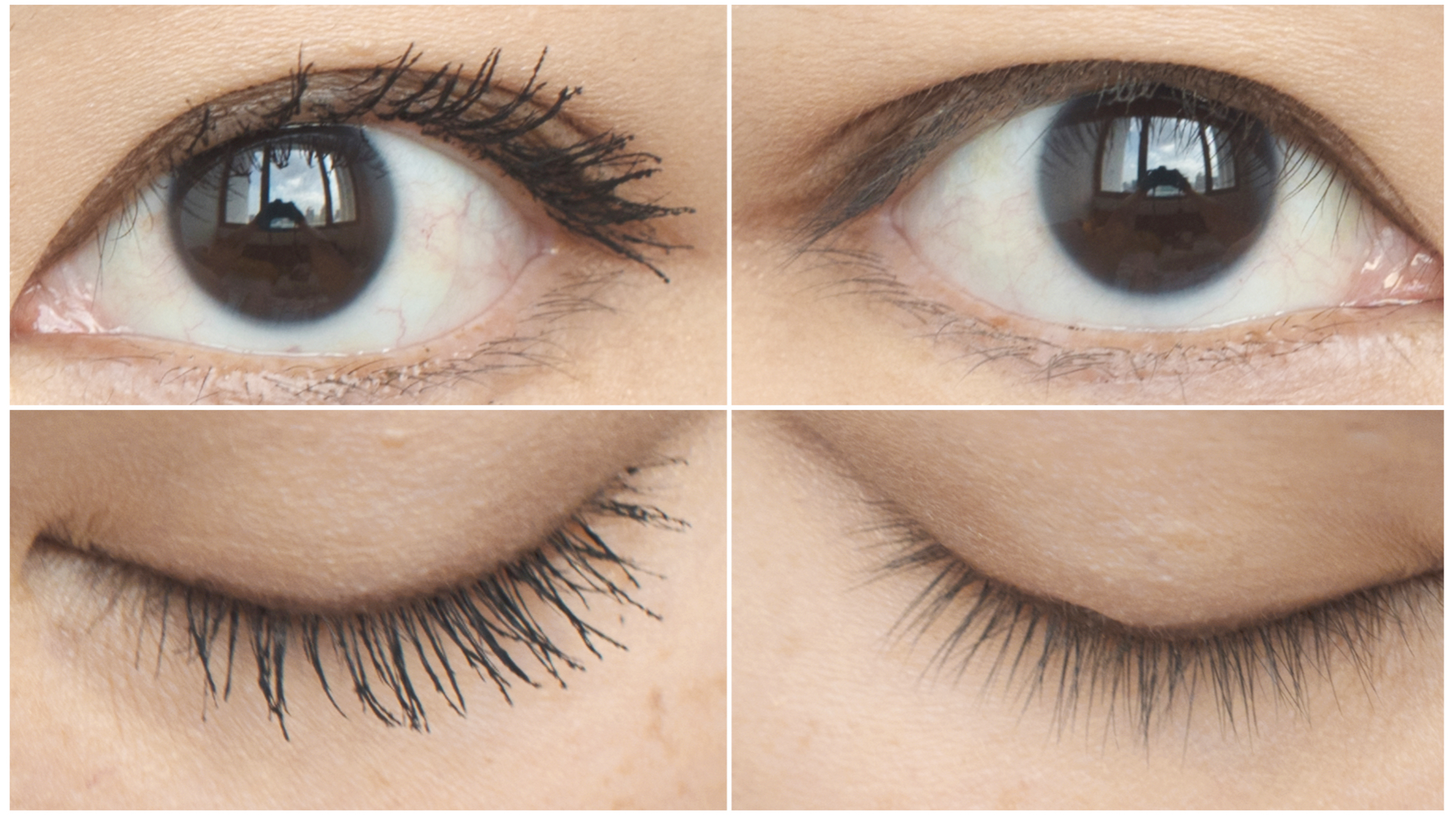 Ooh la la, look at those curls. This is one mascara I will go back to, not only because it volumises and defines my lashes, but also because its metallic pink-and-black packaging is so Harajuku-cute. I love the feel of the jumbo tube in my hands and the curvature of the brush, which aligns with the curvature of my eyes and helps to coat the product onto as many of my lashes as possible. It’s good to know there are other alternatives out there and this is definitely one mascara that I will repurchase. 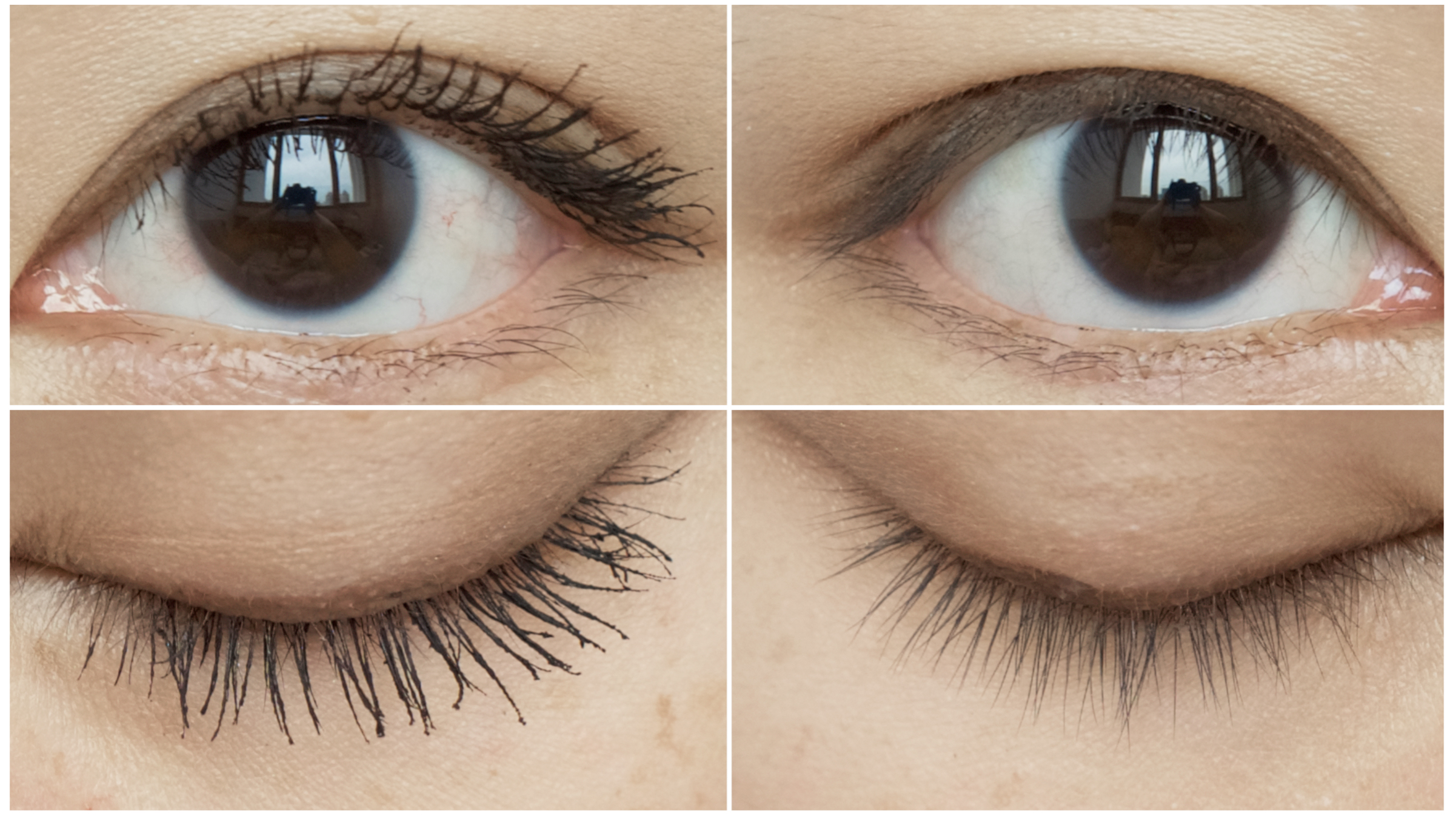 This mascara is another decent product. I love the rose gold packaging. I repeat, rose gold packaging. It lengthens, volumises and holds curls pretty well. Adding multiple layers can give a spidery look, just like in the photo above. It’s not obvious though, unless you go very close and observe. The brush is also slightly curved, so it aligns nicely with the curvature of my eyes, but can be slightly tricky to apply on the outer lashes. Just a note: This mascara may be harder to wash off with makeup remover than other mascaras, so you’ll need extra soaking time.

I know I said 10 mascaras, but I tested out 11 instead. So here’s another look at one final mascara, if you’ve stayed this long into the post! 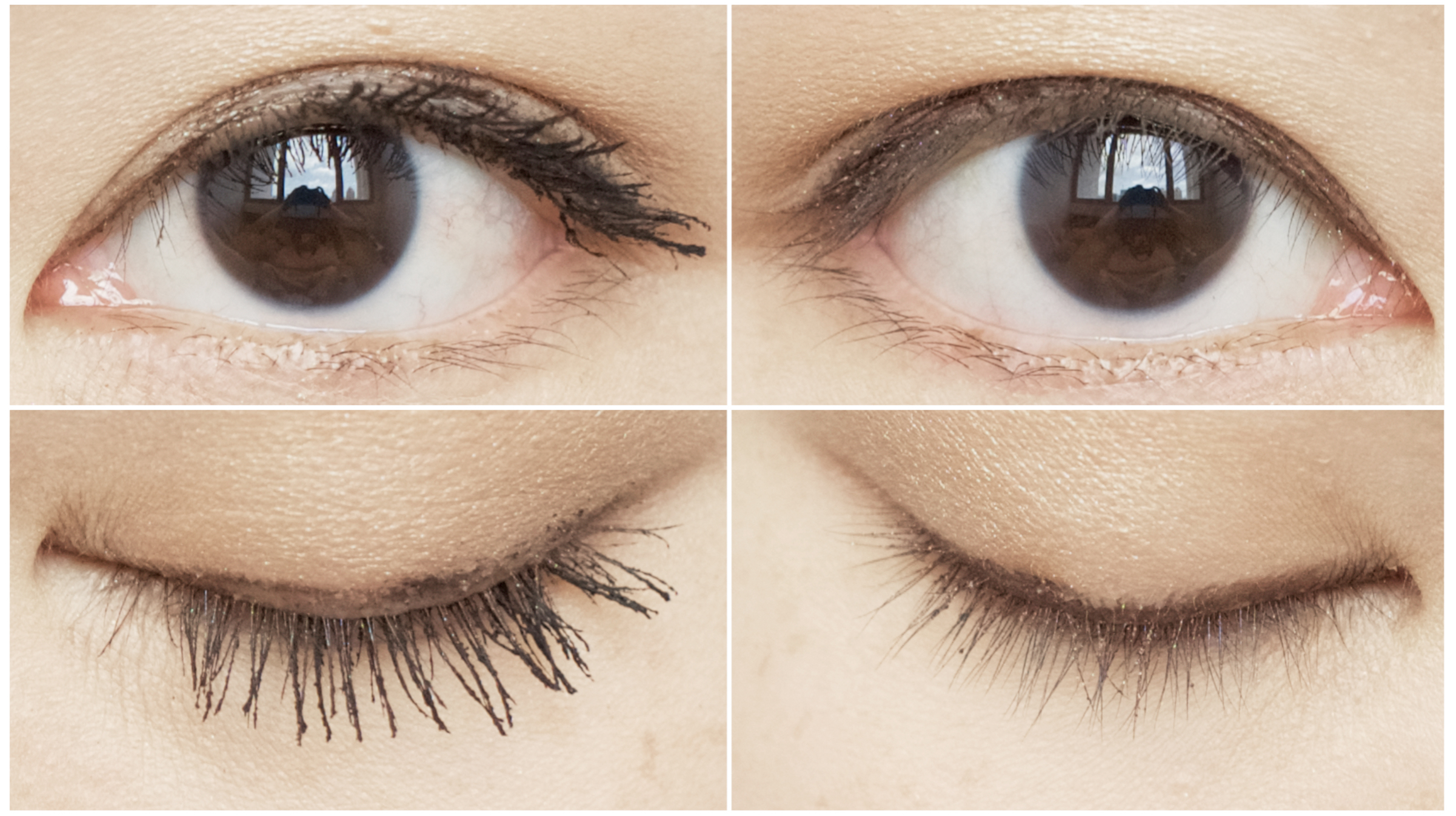 This mascara sure does add volume, like what it says. It definitely doesn’t lengthen as much as some of the other mascaras in this post, but I can’t blame it since it doesn’t claim to lengthen as much as volumise. The brush is quite thick, which can make it difficult to apply on smaller eyes or shorter lashes. It’s also difficult to reach the outer lashes without getting some onto your eyelid. There is a slight scent that reminds me of whiteboard markers.

However, if you’re looking for a mascara that volumises, I would say this could be a good option.

To sum it up, I think L’Oreal and Maybelline make some of the best drugstore mascaras out there that are also friendly to your wallet. I still am in love with my Heroine Make Long and Curl Super Waterproof one, but will consider some of the ones I’ve written about here. If you liked my eye makeup (not very obvious in these pictures though, as I’ve increased the contrast so you can see the lashes better), I’m using the BOURJOIS NUDE SMOKY EYESHADOW PALETTE in 20 Sable Show. I hope you didn’t get all groggy from looking at all the eyes in this post, but if you did, how about having some tea now before you go do some mascara shopping?

Wednesday Musing: My Shopping Wishlist for the Sephora Black Card Member 20% Off Sale

Tutorial: Makeup for Puffy Eyes (One of Those Days)