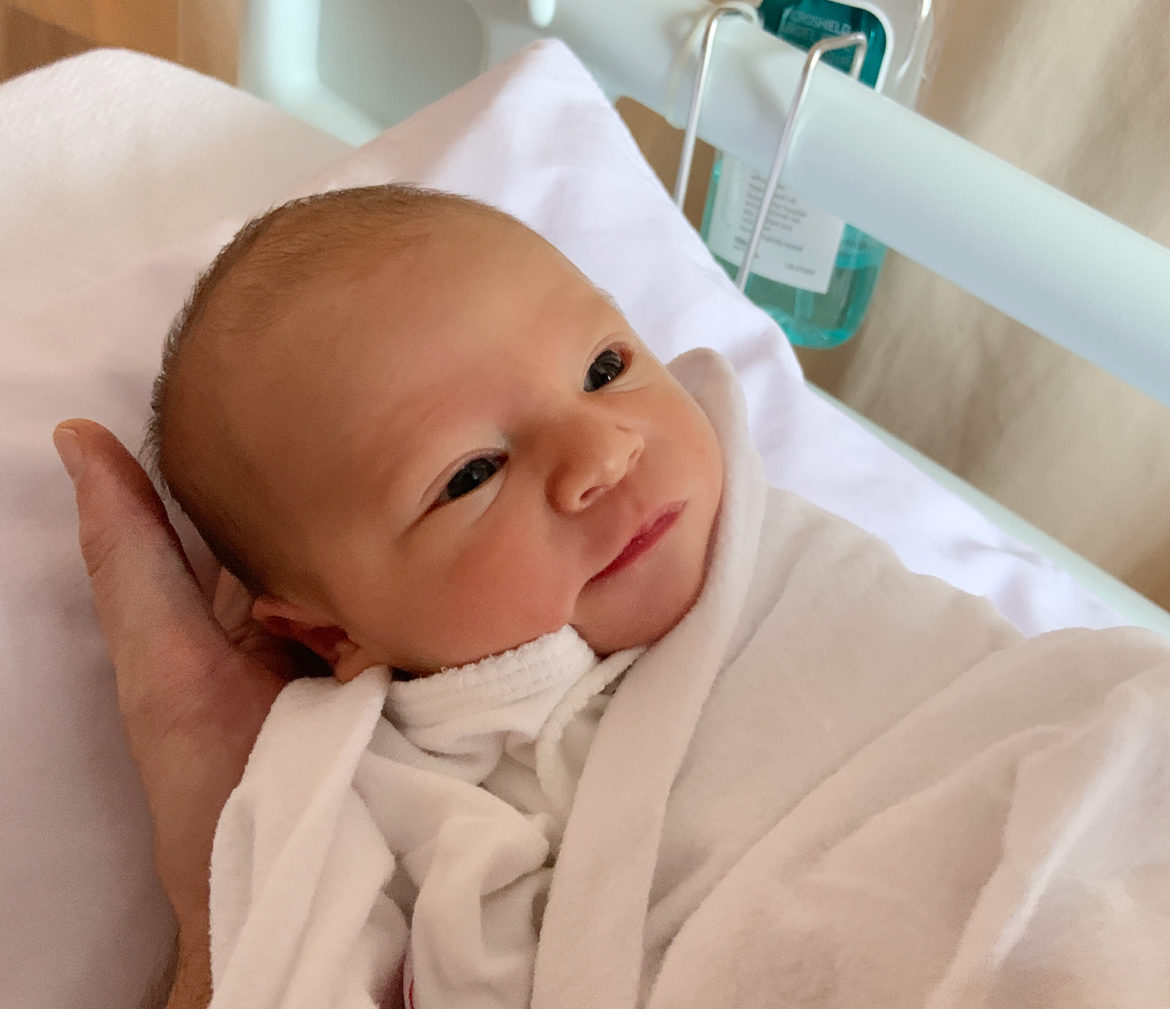 Introducing Aurélie Saynac, the little bundle of joy that switches between tofu and chili padi, who came into this world exactly one week before her due date.

It was a usual, routine checkup at the gynae on a Thursday, and luckily both of us were there for this visit. Our gynae, Dr. Wong, hadn’t meant to do a check on my cervix that day because she had done one the previous week and I wasn’t ready yet. However, since I was already at the clinic, I thought we could just go ahead and do that check anyway.

We went into the ultrasound scanning room, where Dr. Wong found that the level of amniotic fluid was less than ideal, and that there wasn’t also as much blood flow to the baby as compared to the previous week. The cervix examination showed that I had thinned out, but still wasn’t fully open and ready yet. (Whatever this means, I still don’t know. There’s too much jargon to deal with when it comes to pregnancy.)

She then dropped the bomb on us: We had to either deliver the next day or latest by the coming Monday. “I’m not giving you a third option.” We were so not ready for that!

We chose to deliver the next day because the baby had to come out sooner or later anyway, and it was better sooner in our case, since she would be 39 weeks old on the dot on that day. And if the placenta was no longer functioning optimally, it meant our baby wasn’t receiving as much nutrients as she needed – so it would be much better for her to be out.

The plan was then to “check-in” at the hospital after 11pm that very night and induce the delivery so that I could stay a full 2 more nights after that (anything after 11pm is considered the next day). After the induction, I’d get some rest in my room, have breakfast the next morning and then pop the baby.

When we left the clinic, Xav and I went to get some supplies like pads and some Ruffles to prepare for my stay post-delivery. Then we headed home and tried to calm ourselves down while adding the final things to the hospital bag.

That night, after 11pm, we made our way to the hospital. And everything happened in a blur after that.

We made our way to one of the rooms where they prep mums about to deliver. I got the medication to induce the delivery. Almost right after that, the contractions started coming in – and they came in quick. One came right after the other, and each time I had one, it was stronger than the previous one.

At some point, one of the nurses came by and asked me what my level of pain was between 1-10, 10 being the kind of pain that would make me cry. I said 5. She said then that I had to remain in this room for observation and not be released to my actual suite room. I should have asked for the epidural there and then, but somehow I decided to wait for a while. Luckily she came back quite soon after and I told her in between breaths that I wanted it now.

While waiting for the anaesthesiologist to arrive, my contractions steadily grew worse and closer to each other. I think it was probably 10s between each one. I can’t remember. I just remember they kept coming and wouldn’t stop and I kept feeling like I wanted to die.

They gave me laughing gas, which was a joke. It did nothing to numb the pain, but made me feel as if I was on an alcoholic high. Like when you go clubbing and your feet hurt from your heels but you don’t feel it because you have to focus on balancing and walking straight. In my frustration, I straight up told one of the nurses, “It’s useless!” LOL.

At one point, I even felt like telling them to give me a C-section – just cut the baby out – so I could stop feeling the contractions (of course they would most probably not agree to it). But that was a stupid idea and I knew it. I called for the nurses in between my cries and almost-tears, and asked how long more I had to wait for the epidural, and they said about 30min and in my head I went, “FML.”

To cut the story short, soon the anaesthesiologist arrived I got my epidural and all I can say is that epidural is the best love story ever invented. The contractions soon after gradually felt shorter and less painful.

My dilation happened pretty quick too. Somewhere in between having a urinary catheter inserted (this was around the same time I got the induction medication) and being wheeled into the delivery suite, I went from 2cm to 10cm in a span of about 6 hours. When the nurses came to do their routine checks on my dilation, they were so surprised that it happened so quickly. This was especially so as they had to remove my induction medication halfway through as my baby had an episode of being in distress due to it.

I couldn’t believe it when a nurse came by and said we were going to the delivery suite. I asked, “Huh? What’s my dilation?” They said, “10cm.” That was way sooner than I had expected! At that point, all I could focus on was breathing and staying alive. I let them handle the rest. All I could pray for was to have Dr. Wong deliver my baby instead of another random doctor because the timing was earlier than we had planned for.

The nurse who came to wheel me off wanted to get me off the epidural but I pleaded with her to at least wait till the doctor arrived to do it. We “negotiated” for a while but I’m actually not even certain she listened and waited. Professionals do what they’re supposed to do, so maybe she was only entertaining me. I refused to let go of the laughing gas when it was time to go though. Who would have thought?

It was such a relief when I saw Dr. Wong enter the delivery suite! I was quite unsure of what I had to do, but there were a total of three nurses/doctor/midwife, Xav and I. They told me that I had to push when they said to push.

At the beginning, it seemed like there was some sort of waiting. A couple of times, I tried to push as instructed. At one point, Dr. Wong said the baby’s head was at the entrance and invited Xav to take a look (which he did).

The waiting around was awkward, and then I realised that they were all waiting for me to inform them whenever I had a contraction, so that they could tell me to push. It all happened very fast too!

Honestly, I couldn’t feel anything down there. The two nurses/midwife also helped me to push the baby out by literally pressing on my tummy and physically pushing/squeezing her out while I used whatever was left of my abs and Pilates techniques I could remember. Xav was at my back, helping me curl forwards while I pushed. How I knew the baby was out was when Xav went all excited and exclaimed, “She’s here! She’s here!” Then I heard her cry and I saw her for a brief moment – bloody, pink, arms all stretched out, kicking, alive and all.

Dr. Wong invited Xav to cut the umbilical cord and with that, our baby was free!

They placed her right on me, and it all felt so surreal. I remember thinking at that point, “OMG there’s a My-thing on me and it has weight!” For the record, I couldn’t see her while she was on me, so I could only feel and hear her.

Right after the delivery was quite anti-climax. Dr. Wong had to remove my placenta, count all the sacs and remove as much bloody waste from my insides as possible. I think she might even have stuck her hand into me before my dilation ended (she’d prepped me for this during one of our gynae visits). Honestly, because I couldn’t feel anything, I wouldn’t have known it if someone stuck a baby hippo inside of me.

Meanwhile, our baby was taken to the heating pad/incubator thingy in the same room and they had to suck fluids out of her lungs and stuff. Dr. Wong proceeded to stitch me up. I started to feel the thread after a while as the epidural wore off, but luckily she was already on her last stitch.

Afterwards, we got about an hour with the baby laying on me (still in the same delivery suite). Between that and being in my double-bedded suite, I really can’t remember what happened. I remember though, that I was relieved it was all over, and that the nurse who wheeled me back to my room helped us take some of our first photos as a family of three.

So it’s almost the end of my confinement period, and I’m a little scared of how we’re going to handle this little one all on our own. But that’s a story for another day. 🙂

P.S. If you’d like to follow us on our journey, you can head over to my IG @roxannesaynac. I currently post more Stories but am hoping to also include more posts on my permanent feed when I can.

How Being a Mum Has Changed My Life