Pretty Your Nails with Scotch Naturals and Nourish Naturally

I was invited to a manicure and pedicure session at Nourish Naturally one afternoon this November to try out the new range of nail polishes from Scotch Naturals. It was a fun experience and I really liked how the polishes are natural and harmless.

Scotch Naturals WaterColors nail polishes seem really cool because they are eco-friendly, hypoallergenic, 100% biodegradable, vegan, cruelty-free and are also free of gluten, fragrance, parabens and toxins. On top of that, they don’t contain the following three harmful substances normally found in other nail polishes: Formaldehyde, endocrine disruptor Dibutyl Phthalate (DBP) and reproductive toxin Toluene. To sum it up, Scotch Naturals WaterColors nail polishes contain only water, acrylic polymer and natural colorants and are extremely safe (and odourless) to use, even when you are pregnant!

Because the nail polishes are formulated in this way, they actually help to make your nails healthier when you apply them on. They don’t cause yellowing of the nails even if you leave them on for a long time and thus, you don’t need to use a base coat. The polishes dry up very quickly, quicker than normal nail polishes. I personally tried a DIY home manicure with one of these products and I am in love with how easy it was to use.

Here’s the catch though: If you’ve been using normal polishes regularly, it means your nails could very well be unhealthy. Scotch Naturals WaterColors nail polishes adhere better to healthy nails than unhealthy ones. This means that if you switch to Scotch Naturals, the polish will start to flake off after just a few days. For me, my very first application started chipping off the second day and lasted less than 5 days, after which it looked simply disastrous. The good news is that after a few manicure sessions with Scotch Natural WaterColors, whether it’s done at home or at the salon, the polish will start to adhere better and last longer while it heals and protects your nails. This will take up to 2 – 3 times before you see improvements. Removing the polish is pretty interesting as it doesn’t come off as an ink, but rather like paint peeling off a wall. I suggest using a light coloured polish (such as Neat) for the first few times before taking on a dark colour because otherwise, the chipping will be very obvious.

At the moment, there are three collections you can find: 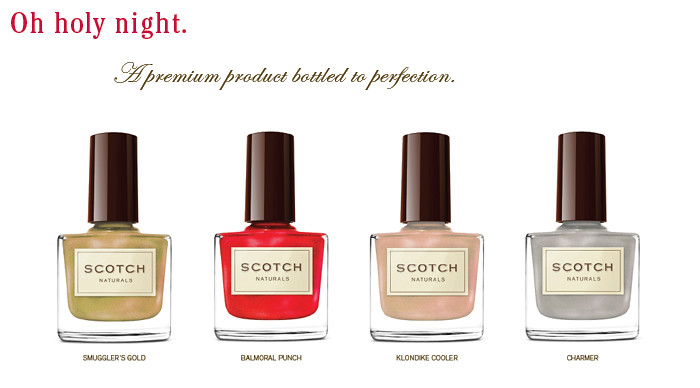 Smuggler’s Gold – Shimmering gold (to be launched in December)

Charmer – Shimmering platinum (to be launched in December) 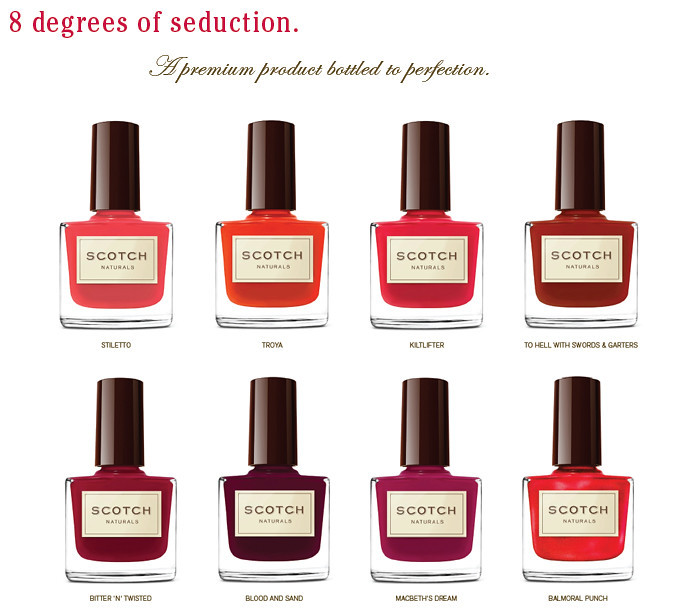 To Hell with Swords and Garter – Seductive scarlet creme

All Scotch Naturals WaterColors nail polishes can be found exclusively at the Scotch Naturals website (Singapore-based) and at Nourish Naturally (located at 215C Upper Thomson Road) and retail at SGD$22.90 each.

Let’s take a look at what I went through at Nourish Naturally, the salon that introduced me to Scotch.

The colours from which I could choose. I picked the light gold one at the bottom.

Served by two manicurists while I sat and relaxed.

Chatting with a customer.

I was seated right beside a full-length window (the salon is located on the second floor).

I'll admit it: It was my first time getting a pedicure at a salon.

This candle is really cool. It melts when you light the wick...

And then you pour the wax out and apply it onto your skin as a moisturiser (plus, it's organic too).

I felt so relaxed at the salon and the staff there were friendly as well. The ambience was nice and I didn’t feel rushed at all. I had an express pedicure and a normal full manicure, which included a scrub and moisturiser for my forearms. The scrubs and wax moisturiser were organic and that’s what I liked about them. The melted moisturiser wax was not hot and instead it was lukewarm to the touch.

A close look at my nails with a bottle of top coat.

P.S. Have you heard about my current Maybelline giveaway?