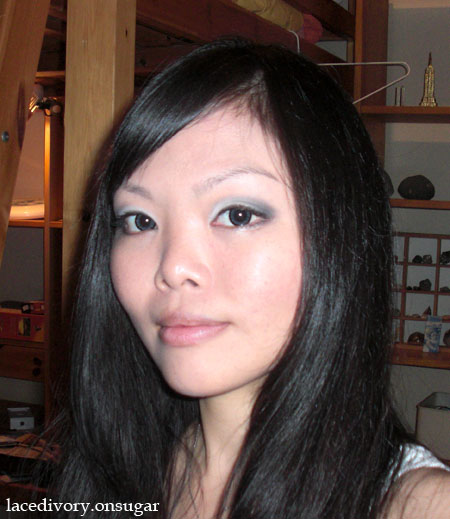 It’s been a few days since the countdown to the new year but I’d still like to share my FOTD for the event! The boyfriend and I were invited to a friend’s house party and I had decided to dress up a little and have fun. Nothing too glam nor sparkly though, because most people there do not really go crazy over makeup like I do. LOL.

For Eyes: Urban Decay’s Primer Potion, Nars’ eyeshadow in Night Clubbing, the top right and middle right shade of my Wet n Wild Coloricon Palette in 248 Lust and L’Oreal’s Extra Volume Collagen Mascara. The contact lenses I have on are GEO’s Angel Grey with no degree.

This look doubles up as a winter look as well due to the cool colours used. There is a little shimmer on the eyes but it couldn’t be captured by my camera. I’d wanted to fill my brows in but I hadn’t brought along my brow brush to the boyfriend’s place. This was also probably the first time I had that many products on my face. The Dior foundation set with my Shu Uemura one worked really well and that is my current foundation combination. The rest were for contouring, highlighting and overall extras for fun. =) I also didn’t add any lip colour since I didn’t want to be the only one with a full face of makeup at the party. Still, I hope you liked this!

What’s in That Perfume

Tip of the Day