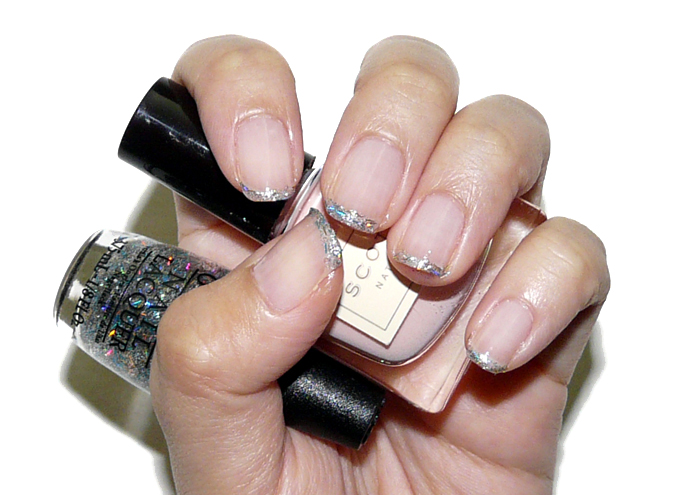 Taken with flash, with the two polishes used.

I love this combo! I used two coats of Scotch Naturals in Neat and then added the glitter strip of OPI’s Save Me, which I received in the February Trove. Finally, I topped the French off with Scotch Naturals’ top coat. At the moment, Scotch Naturals is my all time favourite nail polish brand because it’s free from the top 3 toxic chemicals found in most other nail polishes: DBP, toluene and formaldehyde. It’s very safe to use and doesn’t really yellow my nails no matter how long I leave it on, unlike other nail polishes. My favourite part is that it dries extremely fast so I don’t have to worry about accidentally touching stuff after painting my nails.

This glitter French manicure was inspired by my sister, who started doing the French with all sorts of colour combinations. It adds that little bit of glam into my everyday life, making me feel worth a million even when the days seem gloomy and dull. It’s something perfect for office wear, especially since it’s not over-the-top sparkly. You should try this too!

Rinsie Rose Bracelet is All for Me