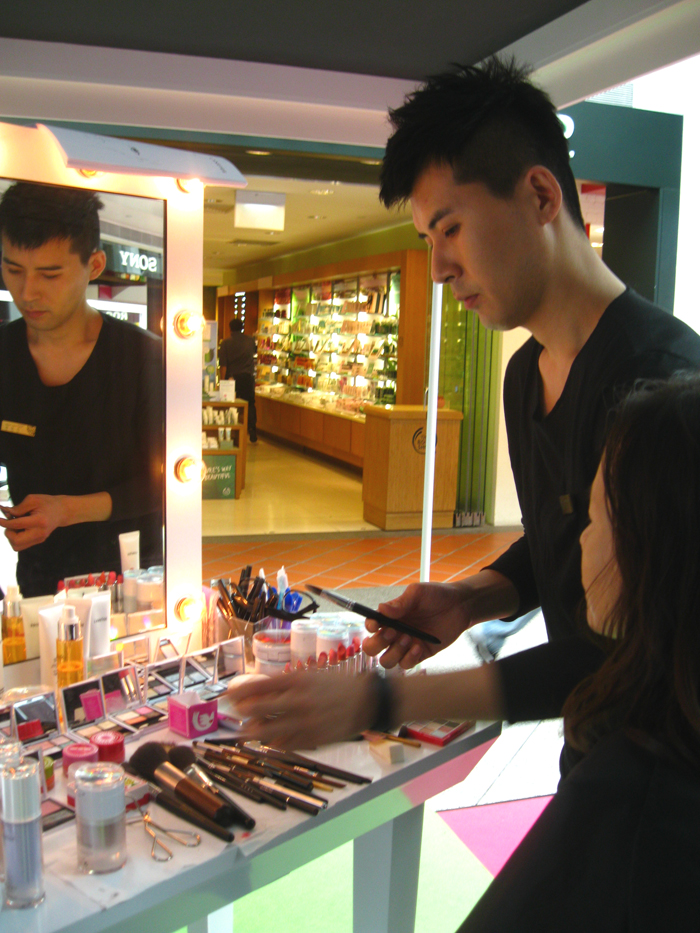 I attended Laneige’s Annual Beauty and Makeup Fest at BHG Bugis some time back, and got to meet Romeo Eun, one of the makeup artists for Laneige. It was a fun girly afternoon with lots of makeup and skincare from Laneige. We got to see the new Love in Bloom Spring 2012 Collection and I got a feel of the eyeshadow palette as well.

Romeo doing the makeover for a lady who's got really good skin.

Load up on the lipstick!

A picture with Romeo.

And then he decided to do this.

I had a super fun time! Most of it was spent observing Romeo doing the makeover, asking makeup (some quite bimbotic) questions and exploring the products that Laneige had at the event. Apparently, the brand’s new BB Soothing Cushion is a great hit with many Laneige fans, as it was sold out at the event and more had to be brought out from the store. It was a great honour for me to meet Romeo, especially since he’s quite the professional and also because he’s most likely the closest I’ll ever get to Song Hye Kyo, the ambassador for Laneige. If you’re wondering, yes, he’s worked with her before!

The look that he did for the makeover was a natural one that suited an evening event. As the client had very good skin, he did not have to spend much time on her foundation and creating an even base. A lot of effort was spent on the brows and this was something I’ve not really seen anywhere else before. He tight lined her eyes. Blush and lip colour were soft. The result? A very natural, neutral look that looked effortless but took a longer time that you’d expect it to.

Guess what? Romeo did a short video for Laced Ivory’s readers! However, it’s still in the process of being edited and translated (he speaks Korean) so you’ve got to wait a little while before the video will be done. It was really fun and impromptu and I hope you’ll enjoy the video when it’s out. Keep a look out! xoxo