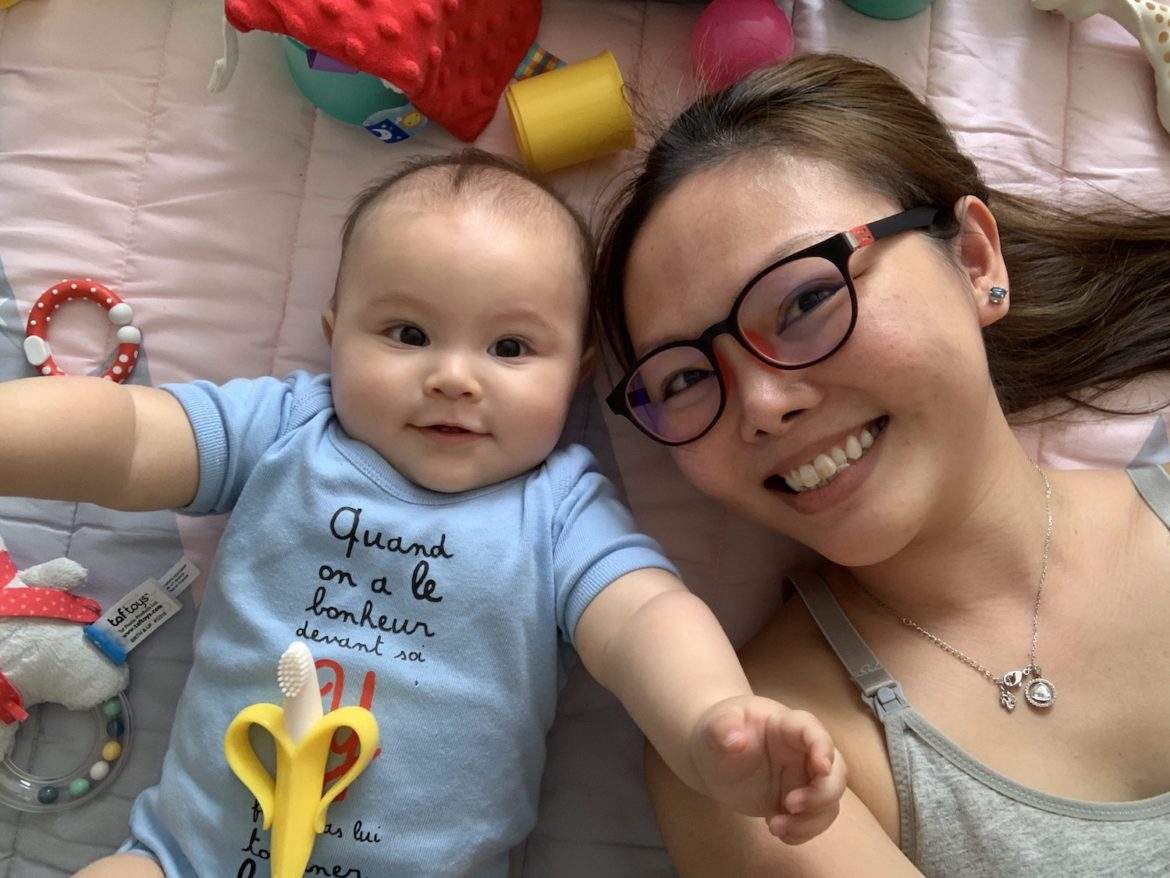 There’s quite a bit of controversy over sleep training. There are several methods to doing this and you either belong to the “yes” or “no” camp. Anyone who sits on the fence about this was lucky enough not to even have to consider it.

As for us, I think we’re sort of in the “yes” group. But before I reveal my “secret,” you need to first have some background context on our situation before we tried to sleep train our little girl.

Honestly, I am not an expert, so I can’t tell you when exactly to start if you’re planning to sleep train your baby. Here’s what I believe: that if your baby is 3 months or younger, you shouldn’t sleep train. It’s perfectly normal for babies that young to be hungry every 2-3 hours, and so of course he/she is going to wake up needing food in the night. If your baby doesn’t wake up for night feeds and is growing well, then you’re one lucky parent – and you can bet that I am super envious!

We had wanted to start sleep training Aurélie at around 4.5 months of age. However, we were faced with 2 obstacles:

This was also why we did not have a daytime routine for playtimes, napping and meals.

If we didn’t have the Europe trip and CNY to deal with, we’d have started attempting sleep training when she was about 4-5 months old. However, because of these 2 factors, we started when she was 6 months old, just after CNY.

WHAT MADE ME DECIDE TO DO IT

Like any parent, I read countless articles online (and also talked to friends) about sleep training. I also found out why some parents are against it. But there was one article which made me pull the plug on being indecisive. I’m sorry, I can’t find that article now – I really read A LOT of articles on this topic.

But in this article, they interviewed a doctor who mentioned that most babies at 6 months of age should be able to sleep 11 hours without waking through the night, and that it was important for them to do so for their brain development.

If 80% of babies could do this at the age of 6 months, maybe I should see if Aurélie could do it too. And if this is crucial for her brain development, then all the more I should give this a go.

Also, I had decided to stop breastfeeding by 6 months, so I knew I wouldn’t feel guilty if I didn’t latch her in the middle of the night.

It’s a good idea to refer to your baby’s sleep patterns when it’s time to start sleep training. They usually follow a similar time pattern – when they wake up in the night, when they sleep, when they wake up for the day, when they get tired and need a nap. Referring to this as a guide helped us greatly when we were at the initial stages of planning her sleep (and ultimately, her eating & playing) schedule.

The nights leading up to when we decided to “properly” sleep train her, we would put her to bed at around 10-11pm. She’d cry as a protest, and we would take gradually longer to enter her room to soothe her (they call this the Ferber method). She’d wake up once in the night around 3am, and then once more about 6-7am. Every time she woke up, I would latch her. If she woke up early, around 6am, she would go back to sleep again after her feed and wake up for the day at 9am. Usually, by 8-9am, she’d be up and ready for the day.

Since the day she was born up till the time we sleep trained her, she had slept through the night a handful of times as well. Although this was pretty random, it gave us the confidence to know that even if we didn’t feed her at 3am should she wake up, she would be OK.

HOW WE DID IT THAT NIGHT

The night we were going to try sleep training, I decided we were going to do a few things consistently every night thereafter. A very big signal to Aurélie that it was bedtime was to turn on the blue LED light of her little tabletop humidifier. I had read that one of the ways to help your baby go to sleep at night was to dim the lights before bedtime. But dimming the lights wasn’t enough for me – I decided that the colour of the light would tell her a lot more. I chose a soft, soothing, warm blue because blue light helps to calm us down quickly from stressful situations (you can google this for more scientific findings). Research has also shown red light to work better at relaxing us, but I think any colour you pick can work because of two reasons:

Aurélie woke up around 1am. I didn’t go into her room to latch or calm her down, but spoke to her over the baby monitor instead (never done this before). The moment she heard my voice, I knew she recognised it because I saw, through the monitor, her turning around immediately to look at it. It seemed to calm her down. She stopped crying. After several minutes, she fell back asleep.

She woke up again at around 3.30am. This time, I tried soothing her again over the baby monitor. It took much longer than the first time for her to get back to sleep. I’d say it was any time between 15 to 30min. She cried, of course, but I had been surviving the past 6 months of night feeds and day feeds every 2-3 hours (exclusively latching, I deserve some kind of medal, seriously) that I was honestly just purely exhausted beyond my wildest imaginations. So I reasoned with myself to not go to her room just this once. At some point, she stopped crying and went back to sleep. So did I.

And that was it.

Since that night, she has gone to sleep at about the same time every night now. She doesn’t wake up anymore during the night, save for when the occasional teething pains hurt. Our evening-to-night routine now goes like this (she’s almost 7 months old):

7pm: bath time
7.30pm: dinner (1 serving of purée)
8pm: milk
8pm – 9pm: relaxing play time/catch up time/bonding time/bedtime story time avec papa et maman
(We turn on the blue light at 8pm even if she is not in the room. We also dim all the lights in the house once she is done with the milk.)
9pm: bed time
(Here, we clean her teeth while she lays in bed, and then hand her a teething toy to soothe her gums. We place her bunny by her side for company – she is old enough. We then say good night and give her kisses before we turn off the blue light and leave the room.)
7.30am the next day: wake up

During the *rare* occasion when she wakes up in the night and is screaming or crying out in pain, we’d go over to her room to calm her down. Once, I had to carry her out onto our outdoor balcony. This has happened all of maybe twice. She has also woken up once at 5.30am, talking to her teething toy giraffe, Sophie, and because she seemed fine, we left her alone to fall back asleep by herself (which she did, and she woke up at her normal time at 7.30am later on).

We’re super happy (and quite surprised) that it didn’t take much for us to sleep train her. What’s important was that we stuck to the things we did before her bedtime. Simple things like the colour of the LED light in her room, to the subdued play time before bed and the teething toy she holds before we leave the room are all signals to her that it is time to rest for the night. Even when we spoke or played with her before bed, we used more hushed tones and avoid “crazy” physical activities that might excite her.

We refrain from feeding her just before sleep, regardless of whether it’s bed time or nap time. This is so that she doesn’t develop food-sleep associations.

The fact that I was absolutely knackered from the past 6 months of lack of sleep really helped me to “be strong” when she was crying in the night. I’d say overall, it took us about a couple of weeks from start to end of the entire sleep training process.

I think that the craziest part of all these is that we started sleep training at around the same time we starting trying to wean her off latching – and doing both at the same time was no walk in the park. I’ll be writing about our experience of weaning her off latching. In case you’re interested to know, that took us a WHOLE lot more effort and intentional spending of money. Maybe that’s why the gods cut us some slack with sleep training.

Our schedule may differ from yours and that’s normal. Every baby is different. As I mentioned, look at your own baby’s sleep cycles and use that to guide you in your sleep training. You’ll need to adjust here and there along the way but the transition will be much smoother. Even Aurélie’s current nap times are based on when we noticed her getting tired during the day before we started sleep training.

Once Aurélie’s sleep cycle had been more or less set in stone, we were then able to plan her daily play, meal and nap times. In all cases, we avoid eating just before napping and we generally follow the eat-play-sleep cycle.

I hope that reading my experience with sleep training will give you some ideas on how you can try it. This blog also serves as a personal record that we can look back on if/when we try sleep training again in the future.

Where Do We Go From Here?