Review: The SK-II Skin Signature Eye Cream (and Does it Really Have Pitera?) 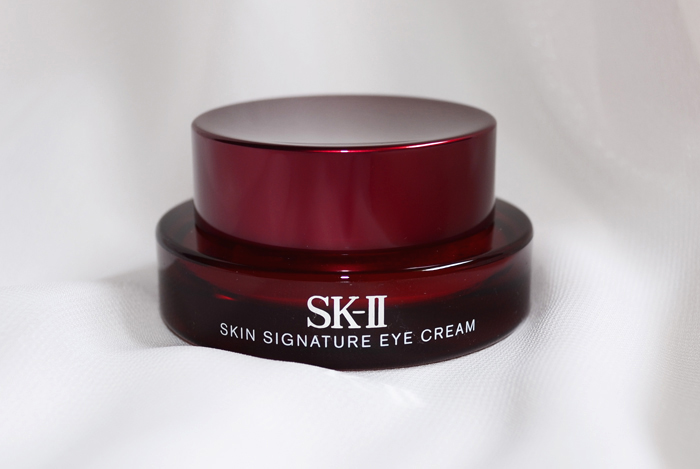 The SK-II Skin Signature Eye Cream is the first ever product from SK-II that I’ve tried ever since my foray into skincare. I’ve tried Clinique‘s All About Eyes and All About Eyes Rich, as well as Caudalie‘s Premier Cru The Eye Cream. It seems, though, that I might have finally found my holy grail eye cream!

I was initially hesitant because of the price – it currently costs S$139 at Sephora Singapore and the product comes only in one size (15g). But I decided it was time to see whether SK-II products really lived up to the hype, so there went my money. The eye cream itself is slightly yellowish and goes on very smoothly onto the under-eye area. It is extremely moisturising and definitely reduces fine lines and wrinkles! The line under my right eye has disappeared after using this twice daily for about three days. I’m so glad! It does help to brighten up the under-eye area as well, as it’s pretty effective in getting rid of dark circles, regardless of whether I’m sleep-deprived or not. I don’t really have eye bags, so I can’t tell if this helps to tackle them.

At first, I was also afraid of the rumours going around about SK-II products. It seemed that for those that used SK-II products, their skin made a drastic change – in a bad way – when they stopped using them. For some of them, their skin even became worse-off than before they had started using SK-II products. I was concerned that this would happen to me too and then it would lead me to forever be dependent on this eye cream.

A closer look at the eye cream! Luxury in a pot of red?

Now, I’m not sure about the rumours; I call them rumours because although I’ve heard of such stories, I haven’t actually met anybody who’s gone through something like this. And if these products really did work for these women, then why did they stop using it? If it was because they didn’t want to be dependent on the products, well, sad to say this but we are ageing all the time. There is no way we can reverse the hands of the clock, or even pause time, if we just go with the flow of nature, if you know what I mean. And if we can all come to terms with that, then you’ll see that as long as you have started to use skincare, you’ll forever need skincare to look at least just as good as you do now.

With that in mind, I have no worries about my eye area turning into a Halloween prop because I don’t think I’ll ever stop using the SK-II Skin Signature Eye Cream, or any eye cream for that matter. My attention is focused on the ingredient list for this product, however. The eye cream is being marketed as containing the awesome Pitera but a closer look at the ingredient list shows none of it. After further research, I came to the conclusion that Pitera is instead mentioned as “Galactomyces Ferment Filtrate (GFF),” the second ingredient listed. This can be misleading because Pitera is in fact a yeast obtained from the fermentation of Saccharomycopsis, another type of microorganism, and should be named instead as “Saccharomycopsis Ferment Filtrate (SFF)”. There is currently little scientific research in the world today to differentiate between the types of yeasts and their effects on our skin, and so to market the eye cream as containing Pitera would not be very truthful, even if GFF works just as well as SFF. To compare, some of the other products under SK-II do contain SFF, so to say that they have Pitera is right (it is even listed as Pitera in the ingredient lists). Could anyone from SK-II let us in on this issue?

I spent Friday night watching this video of an episode of Get it Beauty (52 minutes long, so grab some popcorn), a beauty show in South Korea that teaches women how to apply makeup. It’s really interesting and it sure got me hooked on finding out how different makeup techniques are used on women with different facial features. In this video, there are two makeup artists who do mini makeovers for ordinary Korean women. At the end, everyone in the audience also gets a goodie bag filled with beauty products! While it isn’t subbed – everything is in Korean – you don’t need to understand the language to observe and learn how makeup is applied! I hope you’ll find this useful!

*Update: A brand representative got back to me about the ingredient issue. Here’s a quote from the email she sent me:

As part of SK-II’s ongoing efforts to better understand the yeast that is used to make Pitera®, we had the yeast analysed by a world-renowned company in Europe using the most up-to-date gene analysis technique. This analysis showed that the yeast belongs to the genus Galactomyces and not Saccharomycopsis (as previously thought). And thus, we updated the ingredient name to Galactomyces ferment filtrate for ingredient labeling purposes.”