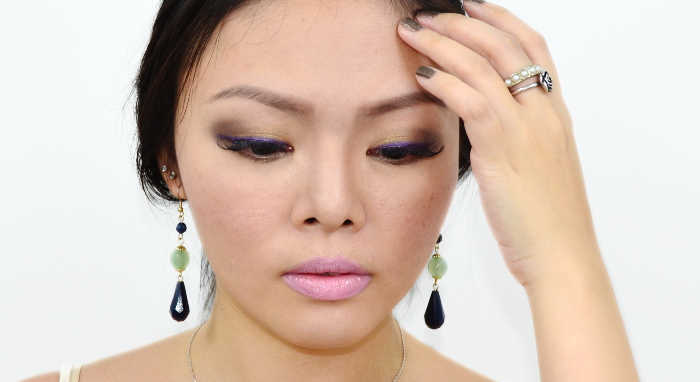 You know those Asian movies where there are princesses and emperors and soldiers on horses? Well, I got inspired one day by the pretty women in ancient palaces and came up with a modern royalty look. It just happens that I have this pair of dangly earrings from Lovisa that I so love, and felt they really suited the part too! Sorry, no fancy head gear though. A few more shots of the overall look:

Because women in royalty didn’t seem to smile a lot, if at all.

Another shot with the hair down.

Actually, this look would be great for a day out at the mall too, because the eye makeup isn’t too heavy. We’ve been told in makeup academy that purple and yellow should never go together because they cancel out but somehow, this gold from Skinfood and purple from Urban Decay fitted kind of OK with each other. A rare instance, I suppose. The lashes from Sleek Makeup are my current favourite and you can get them online from Luxola.

Want to see more Face of the Day looks? Subscribe to Laced Ivory by email here to get instant updates!

* This entry contains affiliate links. When you click on such a link and make a puchase, Laced Ivory earns a commission. In this way, you can help support the blog while you shop.

Giveaway: Something Special & New from Kiehl’s