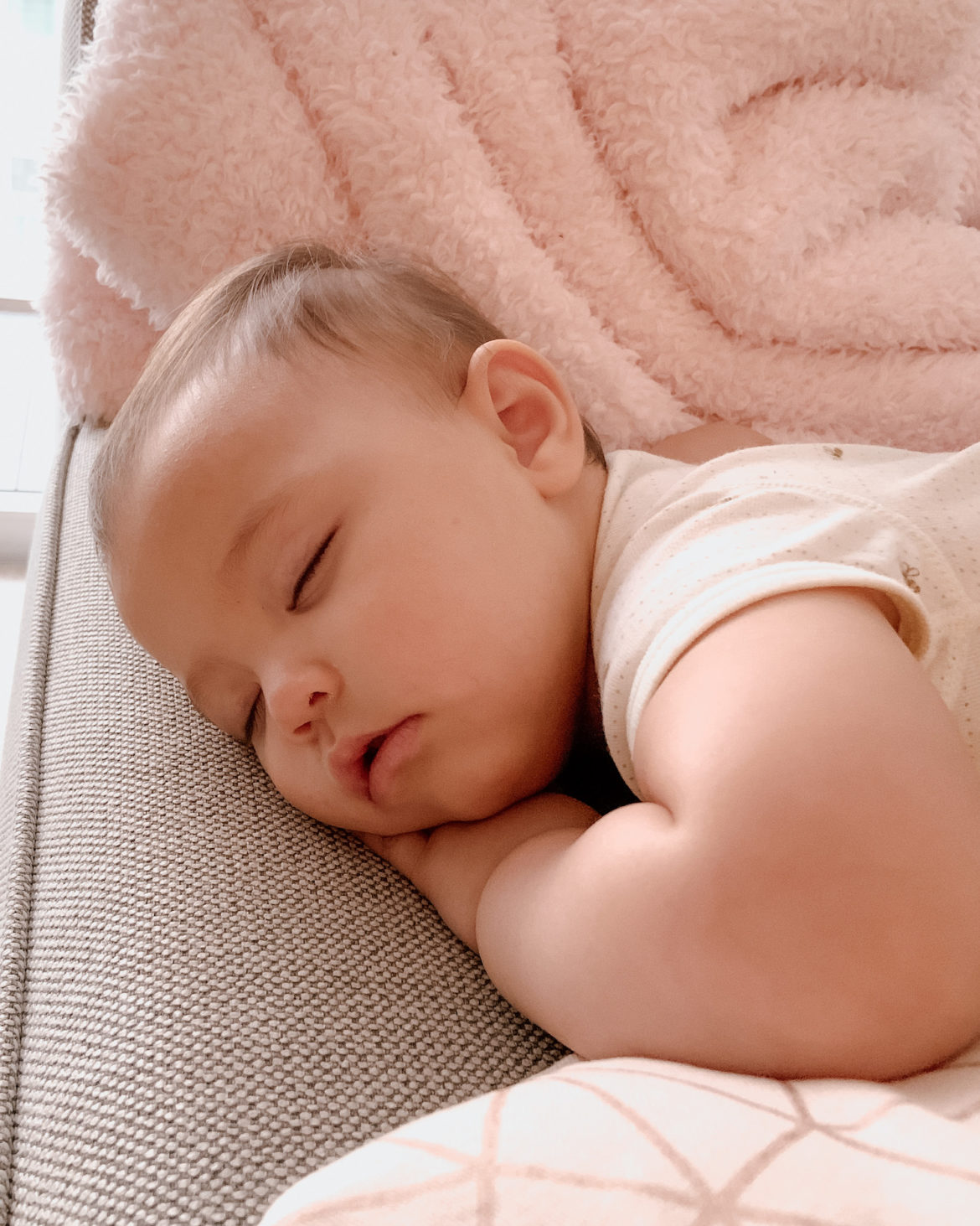 I previously wrote about how we put Aurélie to sleep at night when she was 6 months old. But it seems she’s been going through some developments (which is a good thing) and we experienced a mild version of the 8-9-10 month regression/leap.

We noticed in the past few weeks that our previous method didn’t work so well anymore, and needed a tweak. Instead of her falling to sleep quietly on her own, she now would cry for a good 10-15min before actually falling asleep. While she was crying, she’d also scratch the back of her neck and ears as a form of self-soothing. I decided we needed a different, more seamless method of putting her to bed because I noticed in the mornings that she had really bad, raw scratches on the back of her neck.

We tried this method for the last 2 nights and both times worked pretty well. So, I guess we’re going to do this every night going forward.

Our daily routines are still pretty much the same most days. We still dim all the house lights after dinner, at around 8pm. When it’s closer to her bedtime, we’ll turn on the blue LED light in her room. We still spend time playing, bonding and doing nighttime reading.

You can read about our original bedtime routine here.

WHAT’S NEW IN THIS ROUTINE

It seems like Aurélie has made the connection between wearing long pants and bedtime. So, as a first step to letting her know that bedtime’s near, we’ll put her legging pants on for her (which she would resist if she doesn’t want to sleep) after her nightly milk feed at 9pm. Now that she’s got teeth, we let her play with a baby silicone toothbrush.

Around 9:20pm, we’d move her from our room to hers and place her in her cot. This is obviously a sign that it’s time for bed, so she usually stands right back up and wants to get out. This time, we’d stay in the room with her instead of leaving immediately.

We’ll spend about 5-10min playing with her through the gaps of her cot’s rails. She likes to throw her rubber teething toy Sophie and have us hand it back to her, so we do quite a bit of that.

Then, when we decide it’s time, one of us will say good night, turn off the blue light and leave the room, while the other remains. I’ll then lay her down and tell her it’s time to sleep, though she might not agree with it all the time. I’ll then stop talking and start patting her cute little butt until she falls asleep.

The first time we did this, it took around 2-3min for her to fall asleep from the time I laid her down. The second night, she rolled, tossed and turned (rather dramatically) for quite a bit while I patted her. She even got up at one point and I had to lay her back down. When I paused, just to see if she would react, she would whine and want me to continue patting her. This night, it took slightly longer for her to fall asleep and I’d say it might’ve been 15min.

For both times, she did not cry at all and I count that as a huge win! Also, because I was present, I could instantly stop her from scratching her ear/back of the neck.

WHY WE DECIDED TO TRY THIS METHOD

Aurélie is going through a phase in her development that causes her to have separation anxiety. We think that it might be this that causes her to get anxious when she sees us leave the room, which then leads to her crying out for us to come back. We don’t think, in our capacity, that it could be due to any other reason because we have stuck to our nightly routine since Day One.

She’s also getting quite big and too heavy for me to be carrying her to sleep. I’m quite petite, so carrying a 9kg baby for 15-20min straight is going to kill my back. (I still do this sometimes on Sunday afternoons for her nap, but really, I shouldn’t.)

The only way we can reassure her untill she falls asleep, for now, is to literally just be in the same room and maintain physical contact.

I hope this post helps you find a method to put your little one to bed with less stress. It’s worked well for us and I believe it will continue to, at least for the next few months!

My Fail-Proof Skincare Ingredients You Need to Know