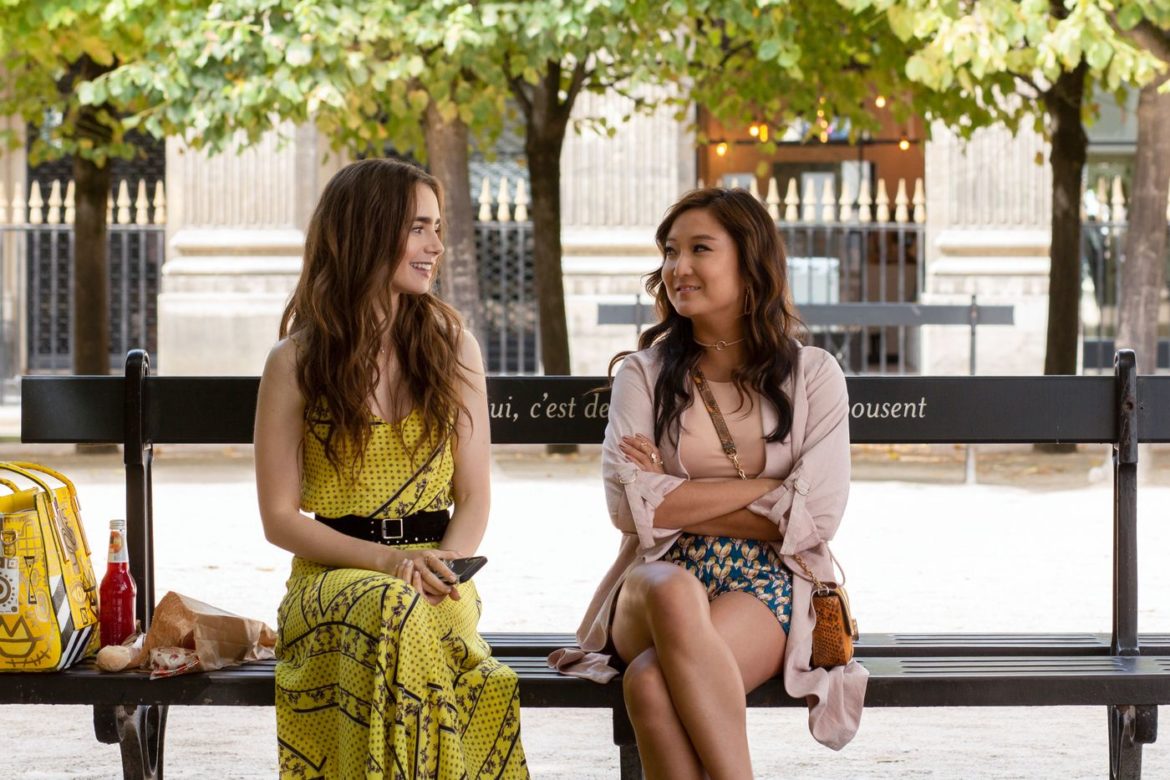 If you love Paris, even if you’ve never been, then you’ve probably already binged Emily in Paris. I couldn’t wait to get started on the series when I first saw the promotional trailer, and I’m glad it was an easily digested series of 10 short 30-minute episodes.

It didn’t start off well though, to be honest. I cringed almost every 5 minutes in the first 3 episodes. First off, Emily herself is such a brat. She moves to Paris for work – not play or studies – and doesn’t speak any French. She’s the epitome of the white American who travels someplace foreign and expects everything in that place to center around the American culture that she knows so well. In other words, she’s unapologetically self-entitled.

She inserts random french words in her english sentences. 5 episodes in and she’s still saying shit like “tray good.” You’d think she’d have bothered to at least learn pronunciation, even after attending French language classes.

Then there is Mindy, the Shanghainese she meets at le Jardin du Palais Royal. Who somehow, speaks Chinese in a horrible Americanised accent. At one point, I had completely no idea what she was shouting to the kids that she was nanny-ing. Hi Hollywood, stop being lazy. You can’t just take an Asian actor and have them spew and butcher an Asian language that they don’t know and call it a day. When are you going to learn that it doesn’t work that way?

Finally, the clichés strewn all over are so tiresome and old. Berets in Paris? Really? Even the French make fun of that. Emily’s boss also exclaims, when she finds out that Emily broke up with her boyfriend, that, “So you’re single? In Paris? … your life is croissants and sex!”

The series does get better though. Emily, for one, stops speaking in her weak attempts at Franglish. I like how the character of Sylvie develops. My favourites have got to be Luc and Julien, Emily’s two co-workers who seem to have great chemistry, and who also portray fun snippets of the French working culture quite well (“the Eiffel Tower!”).

Overall, I liked the series better in the second half. The one thing I really can’t stand is the thing Emily has with Gabriel. Anything to do with cheating never sits well with me. Yes, Gabriel is hot. But the moment it was revealed he had a girlfriend, I basically lost all respect for him and found myself rooting for Emily’s other love interest, Mathieu.

Emily in Paris has been the closest thing to France for me in recent times. I’d been meaning to return for an amazing summer trip this year but Covid took that away. The series brought back so many memories, both good and bad.

The good? Croissants, gorgeous French architecture, the French language, the work-life balance, the respect for and enjoyment of the finer things in life, the weather, French style… The bad? The snobbery or arrogance and the poop everywhere.

I feel the series doesn’t present a true Paris with all its depths. It conveniently picks an outsider’s perspective and just plays it up. I expected so much more. If you’re looking for a more authentic version of life in a talent firm in France, I highly recommend Dix Pour Cent instead.

Updates From my Not-So-Perfect Life

The Best Lipstick for Masks