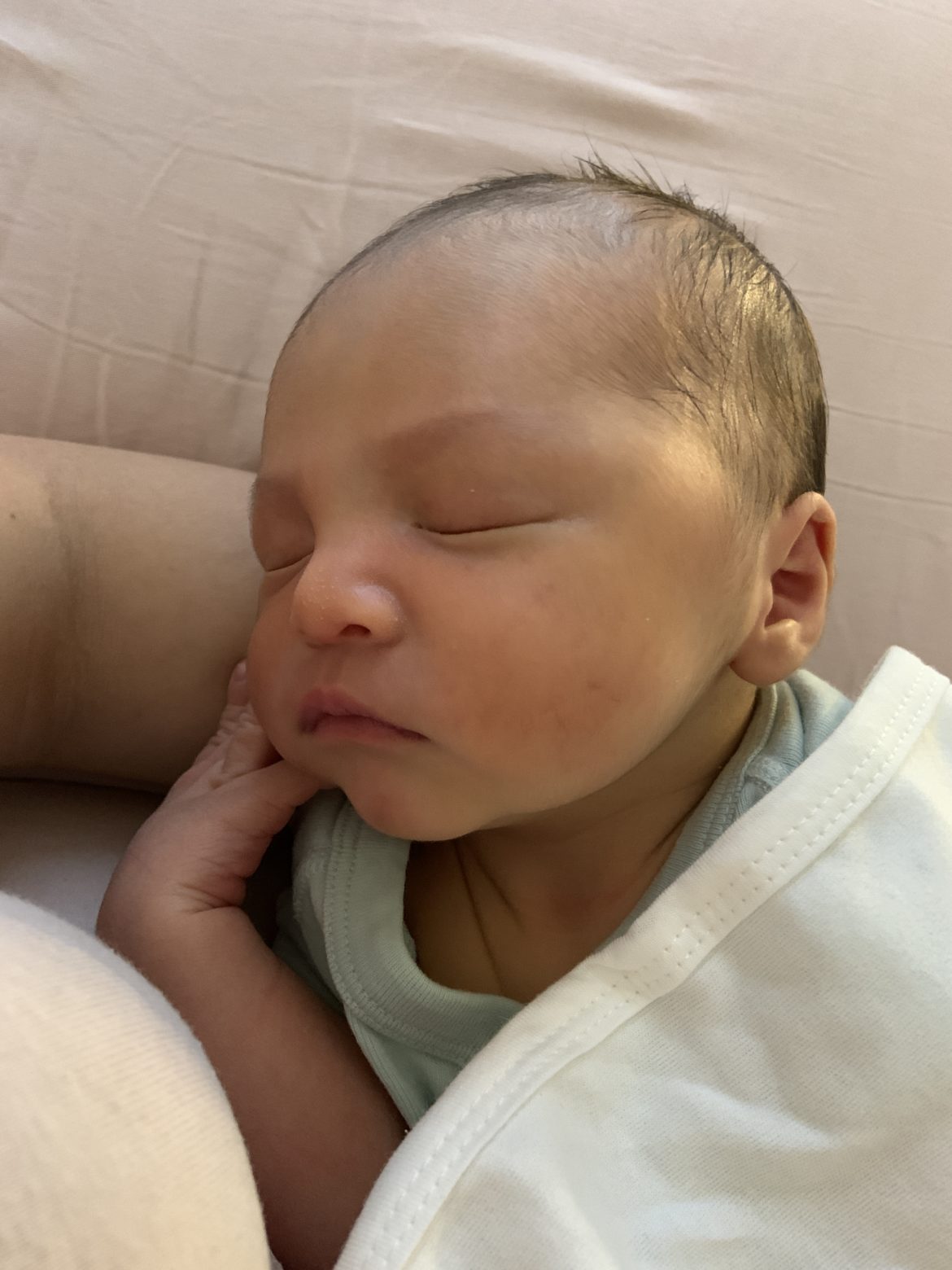 As I sit here typing this, the skin on my belly wrinkled and scarred, I feel a slight tinge of guilt for having a cup of 3-in-1 Nescafe. Although caffeine doesn’t help a newborn get used to pooping (their GI tract is still developing, which at this stage still means an hour or two trying to poop at night), I’ll need it to get through Aurélie’s vaccine and medical checkup in a few hours.

I know mum guilt is a thing, and I’ve experienced it countless times (mostly unexpectedly too). But if dads don’t have this emotional turmoil to deal with, then it must not be that big of a deal when you look at the bigger picture.

Anyway, I thought to pen down Kai’s delivery in case it drags on for too long and I forget what it was like.

{I penned Aurélie’s birth story here, if you’d like to read it.}

Kai was supposed to be due on 12th Feb, which was coincidentally the first day of Chinese New Year. Because the long holiday meant that there would be less staff in the hospital/delivery suites and that the anaesthesiologist might not even want to disrupt her break to give me a shot of epidural, my gynae and I decided we’d give me up till 10th Feb at the very latest to induce a delivery. Upon consideration, Xav and I decided to induce the delivery on 8th Feb, the Monday just after our family’s reunion dinner on the 6th, a Saturday (we had to reschedule the reunion dinner from CNY eve to the 6th so I could go give birth after a nice family meal).

For a few weeks up till Kai’s birth, I had experienced Braxton Hicks now and then. These felt like menstrual cramps, and I didn’t think much of them. Sometimes, I’d wake up in the middle of the night because of pure discomfort or pain in my back, pelvis or belly. On the night of 5th Feb, I woke up again around 1am or so because of yet another contraction. However, this time, the contraction felt different and it came repeatedly, though nothing too painful.

I felt something was off, because this time, they didn’t feel like menstrual cramps. They felt completely different, like nothing I’d ever experienced before (with Aurélie, I had no such contractions, not even BH). These ones felt like I needed to take a dump right away, except that there was no poop.

After having several of these, I reached for my phone to Google what contractions felt like and thank God some people mentioned that theirs felt as if they had to poop too! So I started to time my contractions – if they were indeed contractions – to see if this was it.

By then, it was pretty clear I was in labour. I went to wake Xav up and told him we needed to go to the hospital.

Just before we left, Aurélie woke up from her sleep, so we had to feed her some milk and put her back to bed before leaving. We booked a private hire car to take us to the hospital, and I needed a minute or two there when we reached because I had a contraction. Everyone – the driver, the security guard and Xav – stood around and waited for my contraction to pass so that I could get off my seat.

Anyway, we checked in and I went immediately to the delivery suite.

I was 3cm dilated when I was first checked by the nurses. Which was slightly surprising because I had felt like I was already 8cm dilated for weeks but was found to be at 0cm in the morning (of 5th Feb) at the gynae’s.

So all I had to do was wait. I asked for the epidural right away; learnt from my previous delivery to do that instead of wait till it really hurt. To be honest, everything went pretty smoothly and without incident. We waited for hours and I had to be flipped on my side a few times to let the baby drop with gravity so that I could then push him out. Imagine my slight frustration when the nurses came in to check on me and each time I wasn’t yet near 10cm.

“Faster! Faster!” I was exclaiming, because I really couldn’t wait to end this very difficult pregnancy. One of the nurses told me, when I was at 4cm, that the cervix would dilate much faster once we reached the 5cm mark. So once again, all I had to do was wait (and call for more epidural when the contractions got more intense).

I missed breakfast, but Xav was able to eat it for me. We decided to let my family know that Kai was going to arrive that day and we wouldn’t be able to make it for the reunion dinner. Soon after the announcement, as I was laying on my right, I felt Kai suddenly making his way down. I told Xav to call the nurses because he was definitely coming right now.

It’s so weird to be able to feel that. With Aurélie, once my epidural had set in, I was completely numb from the waist down, so I couldn’t even feel her dropping or arriving. With Kai, I knew when I had to push, and could feel when pushing managed to move him a little further out.

When the nurses arrived, they told me to push and I asked for my gynae. They said they’d call for her (her clinic is in the same building) once they could see his head, so that she could just come and deliver the baby. In my mind, all I could think of was, “Then let’s better get her to come soon. Time to push!” And I pushed. In less than 5 pushes, they were able to call for her and we waited while she made her way down. One of the nurses was nice enough to also place my legs closer together so that I wouldn’t get a bad perineal tear.

Apart from the pain, giving birth actually just felt like taking the biggest dump of my entire life. No kidding. Even my gynae told me to push as if I was pooping – and she was right. Although the nurses and my gynae were encouraging me along, it was when Xav said things like, “He’s coming! I can see him!” that really gave me more motivation, assurance and encouragement, and that let me know that Kai was indeed well on his way.

In a short while, Kai was out and they placed him on my chest, while making sure to show me his genitals and saying “Congratulations, it’s a boy!” I got to see my placenta for the first time ever and holy crap, it’s so much larger than I had expected, like the size of a Bottega Veneta mini pouch clutch! I was also able to see my umbilical cord for the first time, when Xav was invited to cut it. Drained of blood, it was just a white rubbery-looking tube with a texture that resembled half-cooked calamari.

Everything else was standard procedure from this point on. The stitching (I required local anaesthesia while my gynae finished the job), baby warming, weighing, checking, tagging… I had requested for a bed in the double-bedded ward beside the window, and the staff very nicely went out of their way to find one for me in the hospital. I had to wait for a couple of hours for them to get it ready for me, so the three of us – Xav, Kai and I – stayed in the delivery suite while we waited. I was just so relieved that this was all over! Also, wasn’t this like, the smoothest delivery ever?!

I’m glad Kai decided to make his way out before our intended date of induction, because the induction would have been a complicated procedure due to the fact that I had reacted very strongly to the medication in the previous delivery.

I’m also glad in a way that he was born during a pandemic, so visitors were only allowed entry to my ward after I had registered them. We were only allowed 8 visitors and also only 2 at a time. I did not register anyone for the first day of Kai’s birth as I wanted it to be special and spend the day only with Xav and Aurélie, and allow Aurélie to first properly meet Kai before everyone else. My family came the day after (lucky them got to enjoy an amazing reunion dinner).

I thoroughly enjoyed my stay at the hospital. It felt like a staycation – and I had badly needed one after suffering from non-stop pain for months. I had food delivered directly to me for all 3 meals a day. I could just ask for red date tea whenever I wanted some, and had milo and biscuits when I needed a snack any time of the day (even at 3am). I had a “personal butler” on call 24/7 with the press of a button by my bed. The nurses all called me “Ma’am.” I felt like a VIP.

The best part was that I was left alone. To be by myself. Nobody else. No crazy hours-long kicking in my tummy keeping me awake. No worsening ligament pain, no excruciating back pain. No morning sickness, no heartburn. No heavy belly that prevents me from moving or turning. No expectations. No nothing. Apart from having to feed Kai every 3-4h, I was allowed to just rest, breathe and eat. It felt like a complete calm after a period of chaos. I was myself again, even if for just a little while.

Today, Kai is slightly past 3 weeks old. He’s been keeping us super busy and awake at night. We honestly can’t wait for this phase to be over so we can enjoy one another a little more.

I think, I might need another staycation for myself by myself before I move on back into the workforce, once Kai gets a bit older. Until then, we’ll just have to power through the sleepless nights and the challenging days ahead.

My Pregnancy Struggles of Having 2 Under 2